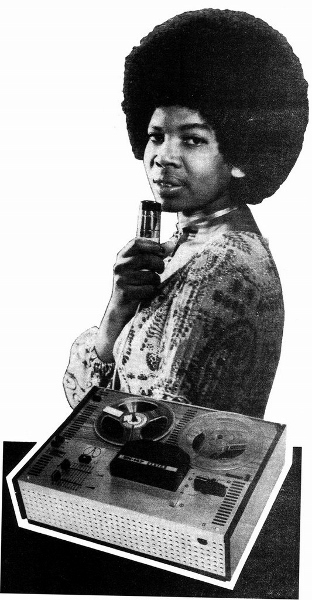 Cassette tapes may be disdained by many for their low fidelity and inability to shuffle, but a new generation of tape lovers has embraced the medium for those very reasons. Brian Shimkovitz isn’t one of those people.

After studying abroad in Ghana as a young ethnomusicologist and realizing how big a thing hip hop is in West Africa, he decided to share all the rare music he’d collected with the rest of the world. In 2006, right around the time the modern crew of tape labels was beginning to pop up, he founded Awesome Tapes From Africa (ATFA), an mp3 blog that is, somewhat ironically, dedicated to sharing an analogue medium. Each post presents a tape Shimkovitz collected on his trips, often focusing on subcultures, linguistic groups and musical styles that have been ignored by most other Western labels.

Recent years have seen a high volume of excellent reissues from labels like Analog Africa and Soundway, meticulously researched  and remastered vinyl compilations mostly focusing on music of the ‘60s and ‘70s. But in the wake of colonial independence struggles, production of vinyl on the continent declined, while more and more recording studios began to appear.  From its introduction in the early ‘80s, cassette technology made a big impact on the way music circulated on the African continent.

Professional and pirate-dubbed copies alike began to circulate, making it possible for regional styles and linguistic minorities to share their music. ATFA specializes in obscure music on cassette from the ‘80s and beyond. Shimkovitz stresses, however, that he’s not on a nostalgia trip — he’s mostly into more recent stuff and some of the featured music was originally released on vinyl or CD. Still, it’s called Awesome Tapes for a reason.

“The cassette was really instrumental in making the music industry in various parts of Africa expand into smaller regions and make it possible for smaller subcultures to distribute their music, and now the digital realm is making that even stronger and people are getting influenced by music from neighbouring countries or from abroad even quicker. And so, in a way, I really like the tape, and that’s how I got into music in Africa, because that was the dominant medium when I was travelling there for the first time.”

Today people are still dubbing and trading tapes, though in some places it’s starting to fade away and be replaced by digital means of trading. “We forget that this concept of making copies or printing a lot of stuff quickly and cheaply is pretty new. We take CD-Rs for granted, but I remember when CD-Rs were first made available, that was, like, such a miracle invention to me.”

CDs have become a lot cheaper in Africa since Shimkovitz first travelled there, but the ubiquity of mobile phones has changed music distribution habits even more.

“It’s really cool to see the ways that things are changing, like the way Chris Kirkley’s [Music for Saharan Cellphones] compilations about music distribution has really shone a light on that.”

ATFA is changing too. Shimkovitz recently took the courageous step of turning his blog into a record label.  “I have way more music than I can ever have time to post on the blog, stuff that I really love. And there are certain things it seemed were worth remastering and making available.”

He’s up front about the challenges of releasing records in today’s climate. “Yeah, it’s pretty stupid, but super fun.  It’s stupid financially, but it felt kind of organic to turn ATFA into some sort of record releasing entity.”

Turning the blog into a label is a way for Shimkovitz to potentially give back to the artists.  By giving these records proper releases and distribution in the West, he’s also giving some artists the chance to get some tour dates. The hardest thing is to locate the artists to arrange an official contract to re-release the music, but unlike the clearance work that went into those compilations, agreements from one artist at a time are all he needs.

Considering Shimkovitz is known for his blog featuring African tapes, it’s fitting that he’ll actually be playing tapes at his Casa gig tomorrow night, with two tape decks and a DJ mixer. Unlike mixing vinyl or using a laptop, playing tapes is much less precise.

“I just do it on stage as I go it just takes focusing on it and making sure you’re quick while tracks are playing preparing the next track. I know a lot of the tapes pretty well, but I’m always bringing out new tapes that I don’t know so well, so there’s  a bit of spontaneity to it for sure. And mixing and blending and matching beats is a whole different thing with tapes. You can’t really drop the needle, obviously. You end up fiddling around a bit, but ultimately there’s a big of a leap of faith  when you press play.”

I assured him that Montreal embraces spontaneity and creative hybridity.

“Montreal’s cool because Montreal’s down with electronic  music and dance music, but there’s also, like, this sort of wild  DIY undercurrent, whereas in Berlin, where I was living the past year, there’s this heavy emphasis on the sort of ‘rules of techno,’ and things like that, and I’d play at those types of parties and kind of sometimes clash or confuse people. But a place like Montreal I think anything goes and people are gonna be down.”

Come and find out. ■

Brian Shimkovitz will also be part of Beneath the Surfaces, a discussion with Jonathan Sterne, Justin Evans, Don Wilkie and Jake Moore at at la Sala Rossa (4848 St-Laurent) on Saturday, June 8, 1 p.m.