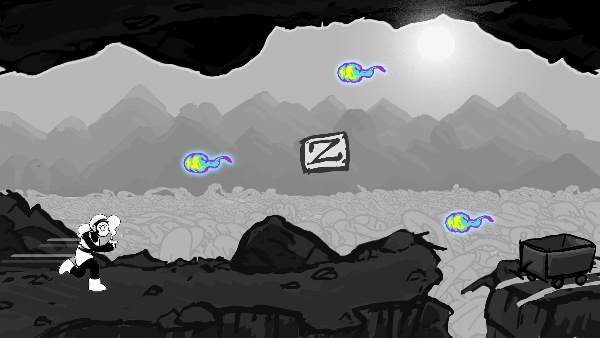 Technologically savvy Toronto-Montreal kabuki-clash rockers Yamantaka // Sonic Titan were the talk of last year’s Pop Montreal thanks to their ambitious DIY rock opera 33, which they described to Cult MTL at the time as “a really cheap, contemporary gay rock opera, but Wagnerian.”

Now, the “noh wave” troupe are looking to bring the audiovisual extravaganza to those who missed out in the form of a new video game for the iOS and Android platforms (and maybe more if all goes well) called Your Task // Shoot Things (note the familiar acronym).

Making games isn’t cheap though, so the group, who are working with Toronto indie development duo Golden Gear, are looking to raise $40,000 via crowdfunding site Indiegogo.

“Rock operas are very integrated,” says project producer Aylwin Lo, who also does the band’s lighting and projections. “We think that experience is great, but theatre is difficult to put on, financially speaking. This game would be an interactive rock opera, so it’s still engaging, but it’s something you can play whenever you want, and can do it more than once.”

Your Task // Shoot Things is based on the same endless running mechanic popularized by the likes of Jetpack Joyride, and players will perform actions that are tied to the music, although in a more suggestive manner. The visuals, primarily done by Yamantaka drummer Alaska B., will be based on 33, and the music will comprise tunes from their Polaris shortlisted self-titled debut and their upcoming second offering.

Because the levels end when the song finishes, Lo calls the gameplay style “finite running.”

The group only has four days left to raise nearly $35,000, so they’ll need a last minute miracle in order to get there, but even if crowdsourcing doesn’t pan out, they’ll continue to work on the game, albeit at a slower pace and with more modest goals.

“It’s been stressful,” Lo says of the Indigogo process, “but if you’re in this situation you want to know if there’s enough interest, and this is a good way to test the market.”

There are also some pretty enticing rewards for those who fund the project, including hot sauce, jewellery, a mini-arcade cabinet, piano lessons from keyboardist Brendan Swanson and yoga lessons from singer Ruby Kato Attwood. ■

To contribute to their effort you can head here.