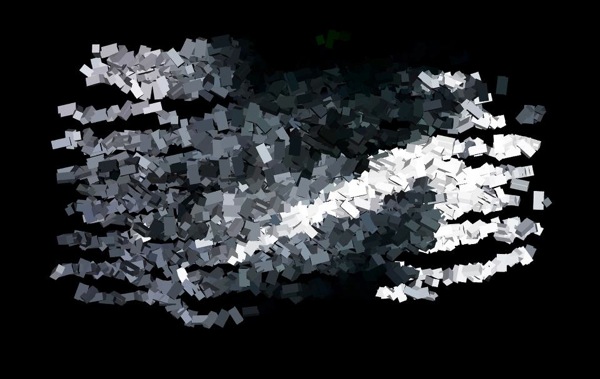 Still from Maotik and Fraction’s Dromos.

Our faith in Progress, a belief that we tend to be improving as a society, has generally coloured our perception of technology: every problem has a technological solution, if only we can continue advancing.

With Dromos, an immersive audiovisual performance running throughout Mutek in the SATosphère, French artists Maotik and Fraction problematize this linear notion of progress. Drawing on the French urbanist Paul Virilio’s concept of “dromology,” or the science of speed, their work is a narrative spectacle constantly at war with itself.

Virilio argues that modernity is defined by increased militarization, which is made possible by increased speed of movement, including the circulation of bodies, goods, information and energy. In this telling, the city becomes a habitable, fortified space in which these various movements can intersect. The term dromos itself comes from the ancient Greek term for a race. Indeed, both war and modern capitalism depend upon the naturalization of competition, and this oppositional foundation is on display in Dromos, but this isn’t a celebration of speed and war. Most modern technologies — including computers, the internet and all electronic musical equipment — can in some way trace their origins to military research and development. Like other artists at Mutek, Maotik and Fraction use cutting edge means to question our received notions about our relationship to these technologies.

Despite the high concept, the internal structure of the events actually manages to suggest these themes fairly clearly without the added context, and if nothing else the 40 minute long work succeeds in captivating its audience. Beginning with a simple dot matrix of white on black, Dromos oscillates between a series of binaries in a constantly moving succession of acceleration and deceleration.  The sonic accompaniment reacts as the visuals progress, but the relationship between the two is never clear. Beginning with low rumbles, the sound at times manifests into melodic fragments panning around the room, but always unpredictable in structure.

Aside from the muffled speech featured in the first movement, Dromos is comprised of synthesized sounds and abstract visuals. The various permutations suggest a series of binaries gradually morphing to become something new but without offering any sense of resolution of synthesis, only movement. It becomes difficult to know in which direction we are heading, and this disorientation seems itself to be an implied critique.

Circles and squares oscillate and overlap high above, the square matrix overlaid by circular negative space. As the perspectives shift,  the elements come together, only to be replaced by a rectangle of static that can’t help but recall an old television set. Against the chaos of white noise, a pure white line waves across the field of vision, the two seeming to be unconcerned with one another. This ‘progresses’ into a three-colour field of static, like looking too closely at a colour TV. This static grows until it encompasses the entire room before fading to black, to be replaced by a series of white bars converging again in the center.

Up until this point the audio has remained mostly abstract, so it comes as a surprise when a melodic phrase is introduced for the first time, only to prove ephemeral. A metallic, geometric shape emerges, looking not unlike your old screensaver, but as we move in for a closer look, the field becomes a flickering grayscale of pulsing, interlocked triangular shapes. These triangles are reduced to only white lines, creating a latticework low in the room. Individual protrusions break free, reaching back towards the dome’s center, only to morph once again into a series of overlapping bars. The sub-bass continues to rumble, granting a physicality to the sound, as the movement of bleeps and glitches sweep around the dome, affecting our sense of space.  Just as each progressions seems to be headed somewhere predictable, the expected resolution is interrupted, or our relative perspective shifts in or out to reveal a new set of binaries in opposition. The coda resonated most with me, a violent, if brief, series of red and blue circles, reaching a crescendo of strobes and flashing colors, leaving the audience dazed and without an easy resolution.

Coincidently, the  Archaeology of the Digital show on display at the  Canadian Center for Architecture (CCA) features works that draw on some of the same visual tropes, and likely the software utilized can probably be traced at some point back to early digital advances in architecture. I will assume that the artists have knowingly used these ubiquitous digital elements because they are so deeply ingrained in our cultural imagery. What is perhaps most powerful is how relatively simple building blocks can, through movement and permutation, create an infinitely complex and compelling viewing experience.

The SATosphère is without a doubt an impressive achievement and yet another reason we are lucky to have the SAT in Montreal, but compared to some of the other more interactive and mixed-media performances, Dromos left me feeling a bit flat. Still, the duo make good use of the dome’s 280 degree projections and surround sound, utilizing the shifting depth perception made possible by the space. As the audience reclines across the soft benches, one’s line of sight is unobstructed and something close to full immersion is attained. At times the visualizations extend to the lower parts of the walls, sometimes falling out of sight, but generally the action occurred directly overhead. The dome itself is effectively masked by the eight-projector system, creating a sense of infinite space that is hard to overstate. ■