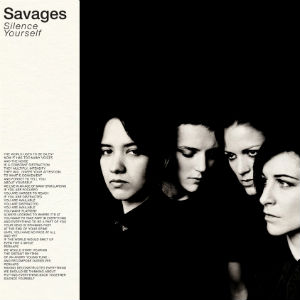 Savages are a rare breed, simultaneously representing two species that hit the endangered list in the 21st century: a great British rock band and a great all-female band. Nationality and gender aren’t what make them great, but for those of us who miss the glut of cool grrrl (or grrrl-fronted) bands from the ’90s, it’s sweet to see guitars, vaginas and Union Jacks together again.

Their sound is vintage punk, post-punk and goth rolled together, lean and fast and wont to accelerate into furious roaring, banging and shouting. The intensity remains when they slacken the pace, given the darkness of the lyrics, which paint abstract pictures of nocturnal sleaze and sado sex (not to be confused with saddo sex, the domain of emo bands).

Though guitarist Gemma Thompson is a close second, singer Jehnny Beth steals the show with her angsty vocals, which will ring bells for new wave fans — if Siouxsie and the Banshees had retained their punk anger and adrenaline while honing their skills and delving further into the perversion touched on in “Melt,” they’d sound a lot like Savages.

The rhythm section is not to be slighted, as Savages’ Ayse Hassan and Fay Milton consistently bring it heavy and hard, laying on a raucous rumble and grind, pound and crash.

Siouxsie aside, there are echoes of so many classic bands here, in the melodies and the muscle, from Joy Division and Echo and the Bunnymen to PiL and Sonic Youth. But the reference points aren’t important. If pop, noise, sex and anger sounds like a winning formula for what you want out of a band, Savages just might be it.

Sean Nicholas Savage, “More Than I Love Myself”

On a totally different tip, our local Savage offers a preview of his upcoming album Other Life, out May 28 on Arbutus Records.