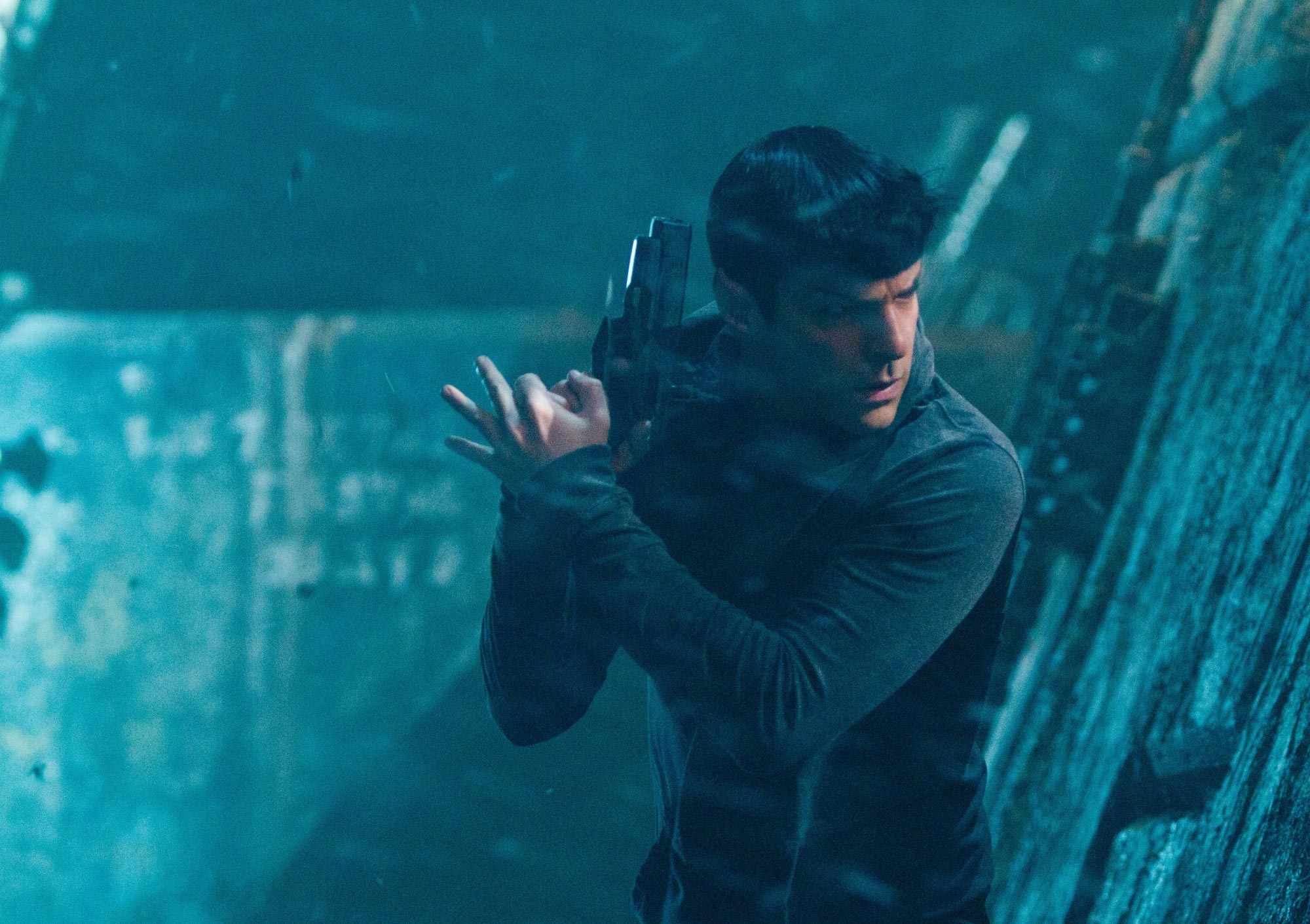 Zachary Quinto as Spock in Star Trek Into Darkness

JJ Abrams’ 2009 Star Trek reboot stands tall amongst the recent onslaught of whiz-bang, superhero/reboot/franchise blockbusters — it’s flashy and fun without resorting to packing the screen with so many abstract CGI explosions and robot fights that one begins to suspect that Hollywood is slowly moving towards their end goal of making 100 per cent of their product computer-generated humanoid machines with celebrities’ faces attached to them spinning around in the stratosphere spitting product placement and Internet memes at each other. As someone who never really paid much attention to Star Trek in any permutation, I find it to be the perfect way to update a known quantity while keeping it accessible for those who’ve never attended a convention.

The danger with Star Trek Into Darkness, then, would be to fall into routine. With the origin story out of the way, Abrams would be free to indulge any fanboy flight of fancy. Good news: this incarnation works as an organic sequel to the original, reviving the once-moribund Star Trek franchise once and for all.

Briefly demoted after his hotdogging antics violate the Prime Directive, Captain James Tiberius Kirk (Chris Pine) finds himself tasked with the morally dubious mission of finding and eliminating a rogue Starfleet officer (Benedict Cumberbatch) who has perpetrated acts of terror on Starfleet establishments. The crew of the Enterprise follows Cumberbatch to supposedly unoccupied Klingon territory only to find that the venerable Admiral Marcus (Peter Weller) may be trying to get them to do his dirty work and that the Starfleet officer they’re after may be hiding a darker secret.

With the origin story far behind us, Star Trek Into Darkness works itself into a groove more befitting of its serial origins. It moves along nicely, expands very little on the already established character traits (although some jobs do get switched around and there’s one new recruit in the form of a weapons expert played by Alice Eve) and loosely reworks the plot of 1982’s The Wrath of Khan into a more current (though not particularly brutal or incisive) skewering of the military-industrial complex. It’s less idiosyncratic and more workmanlike than its predecessor, certainly, but avoids the sophomore slump that often plagues second installments in (possibly endless, in this case) franchises.

Part of the film’s strengths lie in Cumberbatch, who embodies his superhuman baddie role with gusto — it helps that the character is both more familiar and more defined than Eric Bana’s vague baddie in the previous installment. Unfortunately, the flaws of that film are still present: the script still hasn’t found a corny one-liner it can’t work into a scene, the kaleidoscopic use of lens flare still weighs heavily on the film’s style and it still depends on a superfluous bit of storytelling that could generously be dubbed deus ex Nimoy.

Abrams is nonetheless working in the upper echelons of blockbuster filmmaking; it’s always exciting and never panders to its sizeable fanbase. There’s always the feeling that Abrams will not spare a character because they have an important place in the canon and the action scenes are undeniably compelling. He’s managed to make Star Trek feel new (all over again). ■

Star Trek Into Darkness is in theatres now