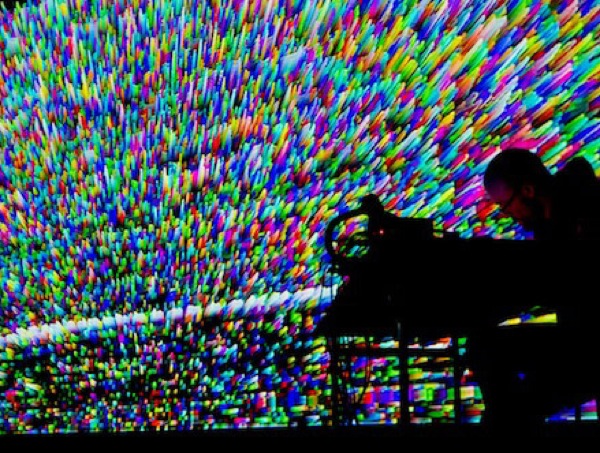 The Sight & Sound digital art festival is bigger and longer this year, and still entirely at Eastern Bloc. It’s pretty impressive that they’ve survived five years and mostly avoided the Slickening: that excrescence of expensive equipment and logos that means financial health. But they’ve still funded a very international group of artists this year, most of them new to Montreal, and isn’t that the point?

So, with lots of unfamiliar names on the lineup, which ones to check out? And is the $350 all-access pass worth it?

Probably not. But that depends on your appetite for digital art and especially your interest in workshops, which are the most expensive (and best, and most unusual) part of Sight & Sound. The first week (May 8 – 11) includes almost all of the performances, which run 8 p.m. to 11 p.m., while installed works are up for the whole month (May 8 – 25), open from noon daily. Workshops pepper the whole month.

How do I know this? Because I’m a professional. I spent hours with Google, scraping theoryspeak bullshit off artist statements and figuring out what they actually do. Why do they write like this? Do they hate us?

I once heard a new media professor say, “explain what you’re doing, but not clearly.” So there must be something useful in it, some power or security, but it sure makes it difficult to be a journalist. Anyway, if you have to pick just one day of performances, try May 11. It’s got signal jamming, chemistry experiments, freaked-out microwaves, and it’ll only cost you $20.

There are many others. Nicolas Maigret’s “System Introspection” is one I didn’t understand until I found a video that shows what Maigret actually does: attack a hard drive like a 19th-century vivisectionist. Whether a dive into data structures holds your attention for more than a few minutes may depend on your exposure to video games and attitude toward recreational drug use. Skull-fucking enthusiasts may prefer Ryan Jordan’s “Possession Trance,” for example. He uses a drum kit and strobe lights to push you around. If you can’t afford a ticket, just turn the lights off and visit his website.

Victor Mazón Gardoqui’s “Void” creates a no-signal zone with miniature jammers (human teeth, a reference to conspiracy nuts who “hear” CIA radio through their fillings) and that theme continues with Noxious Sector’s “Nightmare Inductions,” which “uses self-hypnosis techniques to lead audience members on a guided meditation in which their teeth fall out.” They run a DYI hypnosis workshop on May 19.

So you can have a perfectly weird time with a day pass and a visit to the free installations, but it’s the variety and quality of workshops that sets Sight & Sound apart. It’s one thing to talk about the “democratic” or “subversive” aspect of new media art while stuffing it into a passive gallery experience, and another to breathe solder fumes all day and bring home airport security bait.

Most of the workshops don’t require any experience and limit attendance to under a dozen. Anyone can do Mario de Vega and Victor Mazón Gardoqui’s Network Sonification, where you’ll build listening devices for the 2.4Ghz spectrum, or Jean-Baptiste Bayle Digital Survivalism, a tours of alternatives to Google, Facebook, Skype, MSN, and Apple. Easy.

Coders with a bit of experience should enjoy (the kind of famous) Paolo Cirio’s political data scraping workshop or Bill Doran’s introduction to algorithms in two parts. The second goes more in-depth. ■