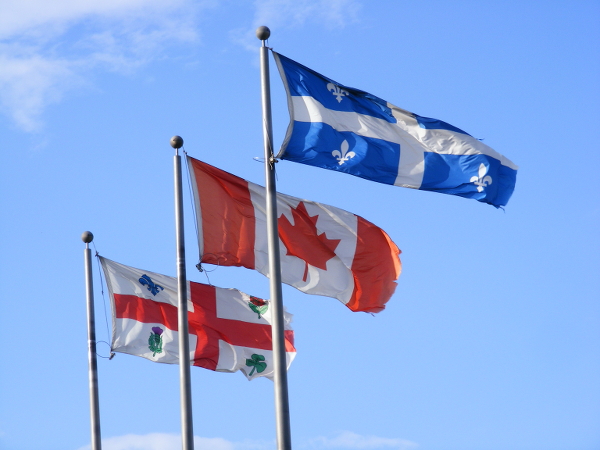 Quebec is a more harmonious place than some would be led to believe. Photo via Flickr

There’s a new poll out by the Association for Canadian Studies that shows Quebec immigrants who speak French were just as likely as allophone or anglophone immigrants to identify with Canada.

So the policies of successive Quebec governments to encourage immigration from francophone countries isn’t turning into the goldmine for Quebec nationalism that some might have hoped, since only a small minority of those who come here pick Quebec (12 per cent) or language (10 per cent) when asked to choose just a single self-identifying label. The rest chose Canada (34 per cent), religion (28 per cent) and ethnic origin (12 per cent).

Well, let’s look at another segment of the poll dealing with attitudes towards immigrants. It turns out that people (anglo or franco) who have the least exposure to immigrants are the most likely to think immigrants should abandon their culture when they move here. They are also less likely to find immigrants trustworthy. I think you can guess the attitudes of people who have regular contact with immigrants. Yep. They are more likely to trust newcomers and support maintaining their culture.

What’s the lesson in all this? It’s that prejudice relies heavily on ignorance. The less you know your “enemy,” the easier it is to hate him and see him as a threat. So Jo Bleu in Saguenay finds it easy to believe that Montreal is plastered in English-only signs, clerks in coffee shops are forced to greet every customer with “hello-bonjour” and soon Saguenay city hall will be sending him his tax bills in English.

And Jo Rednecky in Calgary, whose parents left Montreal in 1976, believes that it’s dangerous for anglophones to speak English in public and that the jails of Montreal are filled with brave store owners who have refused to bow down to jackbooted “language police.”

Quebec media, which you’d think would be interested in demolishing stereotypes, are instead contributing to them with constant reports of language conflicts. Whether it’s the horror of the subway ticket-taker who wouldn’t speak English or the horreur of the metro worker who was asked to speak English, we turn these cases into causes célèbres, ignoring the thousands of people who daily file by the ticket booth without the least bit of drama.

It’s no wonder our out-of-town friends are asking if they’ll be safe driving through Quebec (yes, if you avoid potholes, bridges and Ontario drivers going 80 in the passing lane), whether students are still burning up the streets (they never did, but don’t let that ruin the media myth) and if all our politicians are corrupt (No. Some of them are just stupid).

Now, I like drama as much as the next guy, but the fact is that Montreal is always an amazing place to visit and bilingualism is one of the healthiest things in this city.

It’s the conversation I had with an anglophone Gaz Métro meter reader last week entirely in French.

It’s the way Montrealers constantly negotiate which language to use, not out of legal compulsion but out of common courtesy.

It’s the way Montreal Fringe Festival director Amy Blackmore describes the mix of acts at the annual event: “We now have people applying who don’t yet know which language their show is going to be in.”

Linguistic duality is growing here, to the horror of some, like the Parti Québécois minister for Montreal, Jean-François Lisée. As more and more of us mix with people who share different languages, cultures and religions, the stereotypes of older generations fall apart. We no longer see “others” as enemies who threaten our way of life but as people who can contribute to our culture and our understanding of our ever-shrinking world.

Is that really so bad, Jean-François? ■