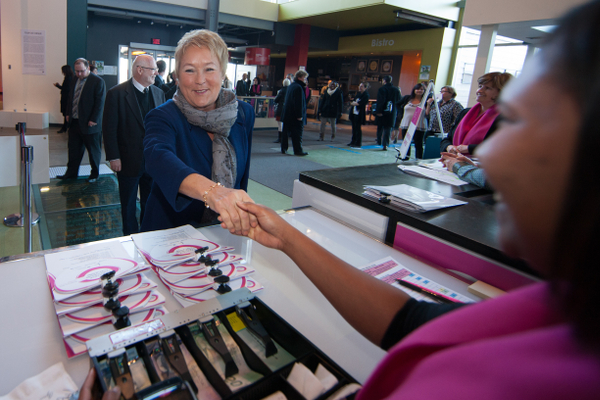 Pauline Marois’s Parti Québécois is quickly turning out to be the party that pleases no one.

And now they even seem proud of it!

Public Security Minister Stéphane Bergeron, ridiculed by all sides following his proposal for a special commission to look into the 2012 “Maple Spring” student protests, declared himself “fascinated” by the fact that no one liked his idea.

This is a little surprising given that pretty much everyone but the police and the Liberal Party wanted to see a thorough public review. There are at least 65 groups that asked for an inquiry into the violence that occurred during the protests — in particular, violence by police. On the other side, citizens upset over pot-clanging and stalled traffic during months of nightly protest marches also wanted to know what went wrong. It was such a no-brainer that you’d have to be a genius to screw it up.

Bergeron must be the PQ’s Einstein. For the commission’s three stooges, he appointed a right-winger to anger the left, a left-winger to piss off the right and a centrist so he could claim it was “balanced.” He also ensured it would have little credibility even before it began hearings.

Then he decided that the commission would not have the power to compel witnesses to testify. In other words, unlike the Charbonneau Commission into corruption, no subpoena power. Which almost immediately prompted a gleeful rush for the exits.

It took less than a day for Montreal cops — notorious for doing everything they can to stonewall investigations into their own behaviour — to decline the invitation. (The coroner’s inquiry into the 2008 shooting death of Fredy Villanueva, for example, ended two-and-a-half years ago, but the report has still not been issued, thanks to the police force’s legal manoeuvres.)

Right behind them was the Liberal Party, which quite correctly anticipated that much of the blame for the student protests would fall on their shoulders. As it should. (And they paid for it when they lost power last September.)

Then, in a further attempt to — as the French say — drown the fish, Bergeron announced that the commission’s hearings wouldn’t be open to the public because he wanted potential witnesses to feel free to come forward. Like the 400 citizens who already gave testimony to Quebec’s Ligue des droits et libertés? Or like the police officers who arrested 5,000 protesters and bystanders in the last year and who predictably weren’t going to testify under any circumstances?

What’s next? How about pissing off your sovereignist allies?

Struggling badly in the polls, Marois has been eyeing the support for other nationalist parties like a cat watching a codfish.

Taking advantage of a tribute to Pierre Bourgault — a fiery nationalist who scrapped his Rassemblement pour l’indépendance nationale party to help the PQ gain power in 1976, — Marois hinted to delegates at a PQ national council meeting last weekend that the sovereignist Québec Solidaire and Option Nationale should fall on their swords.

Pierre Bourgault, she said, “advanced our project to build a country. He made this generous gesture … He scuttled his party to join the Parti Québécois because he knew it would be more efficient, more useful to act that way.”

Both parties responded that although they share the goal of sovereignty, they will maintain their own independence, thank you very much. The left-wing QS has been hammering the PQ on its social policies, while ON leader Jean-Martin Aussant says the PQ has done nothing to promote sovereignty except preach to the choir.

What else? There was the decision to suspend the tuition freeze only weeks after they had restored it. Sure, the cost-of-living increases will be much less than what the Liberals wanted to charge, but the decision angered just about everyone, from students who felt  they been stabbed in the back to editorialists who were disappointed the knife wasn’t plunged in up to the hilt and then twisted a few times for good measure.

Then there was the decision to appoint Quebecor/Sun Media/Vidéotron/TVA  kingpin Pierre Karl Péladeau to head Hydro-Québec. It’s not enough that his empire reaches 30.8 per cent of the daily newspaper readership in Canada, or that he owns the QMI news agency. Now he’ll be heading Quebec’s most powerful state monopoly. The appointment was roundly criticized by journalists and civil libertarians (except at/in/on the Journal de Montréal and TVA), but politicians in the Coalition Avenir Québec and the Liberal Party were busy wiping shoe polish off their lips after rushing to praise the mucho multimillionaire for “volunteering” to take on the second-most powerful job in the public sector.

The 51-year-old Péladeau, who starts his new job today, had conveniently retired from the day-to-day running of his empire a month earlier because he wanted to devote more time to his young family. Nudge-nudge, wink-wink.

Instead, he’ll now be watching safely from the Hydro-Québec head office on René-Lévesque as Marois continues to run the most Keystone Cop government I’ve ever seen. And when her minority government falls , she will lead the party into what will likely be its worst electoral showing since the 2007 election where, under André Boisclair, it attracted just 28.35 per cent of the vote.

And guess who’ll generously offer to replace Marois when she loses?

Yep. The man who most epitomizes the thoroughly corrupt system commonly known as Quebec Inc. — the cabalist elite that inspired the name of this very column.

Shit, my lights just went off! I’ll log onto my account to see… wait. Why don’t I have Internet access? I better call… what’s wrong with my phone? ■