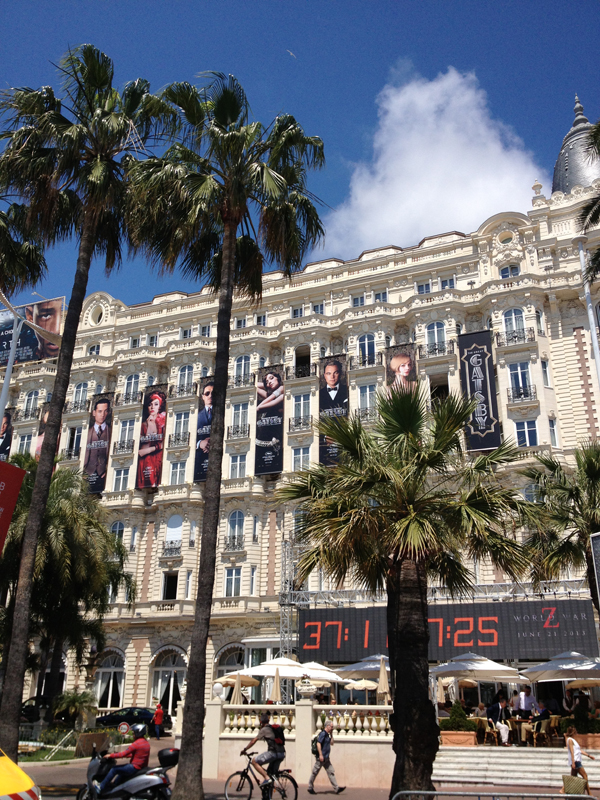 Ever since I can remember, all my life experiences have been influenced, inspired or touched by the movies. More than any other art form, cinema has taught me the facts of life. To this day, I can’t go to New York without thinking — “I’m where Annie Hall, Manhattan, Taxi Driver, and so many films, took place.”  As much as I don’t like to compare film to sport, I always say that the Oscars are the equivalent of the Super Bowl and Cannes is the World Cup.

I was given the opportunity to intern with the American Pavilion at the Cannes Film Festival this month. This was something that I never in my wildest dreams thought possible.  Upon my arrival, I was placed at one of Hollywood’s most renowned production companies, which I shall not name, but it would suffice to say that I experienced my own private version of The Devil Wears Prada.

I would go in for my six-hour shift, which consisted of doing things like serving coffee, picking up scripts or getting the boss’s lunch from the hotel next door, and then proceed to rush to my room and change into a dress and heels to wait in line to see movies like Asghar Farhadi’s Le Passé, Roman Polanski’s Venus in Fur, Nicolas Winding Refn’s much anticipated Only God Forgives, and many others.

For a film student, Cannes is like a fancy summer camp that is both exciting and dreadful because you get to see a lot of the business side of film, which often reduces the art to cheap entertainment. For example, a movie like The Great Gatsby, which garnered widely mixed reviews (Variety called it “The Good, the Baz, and the Ugly”), was very much used as a tool to attract crowds who wanted to see big names on the red carpet. The great Carlton Hotel was bejewelled with posters of the movie, and ads were already circulating for at least a month before its release. Not to mention that Gatsby was not even in competition.

At the same time, Cannes is also where so many of the independent gems make their stellar debuts, and the festival prides itself as being an auteur’s film festival. This year was particularly good, with films by Jim Jarmusch (Only Lovers Left Alive), the Coen brothers (Inside Llewyn Davis) and Roman Polanski (Venus in Fur).

Cannes is a forum for young directors to stand in the spotlight, like 27-year-old Ryan Coogler, who directed Fruitvale Station (the most buzzed American movie at Cannes, actually) and Montreal’s own Chloé Robichaud, whose first long feature Sarah préfère la course was also shown in the Un Certain Regard section of the fest.

Overall, going to Cannes has been the most surreal experience of my life so far. Going in and out of the Palais du Festival with my badge made me feel like a part of the big leagues (even though I was not allowed inside any press conferences, but was only picking up some important person’s tickets). Walking through the ‘Artists’ Entrance’ only to run into Christoph Waltz on my way out of the washroom as I gaped in awe is still one of my favourite moments. But most of all, the ability to sit in a dark room with a big screen and watch a movie for the first time ever, audience, directors and actors together, is the best feeling of all. ■