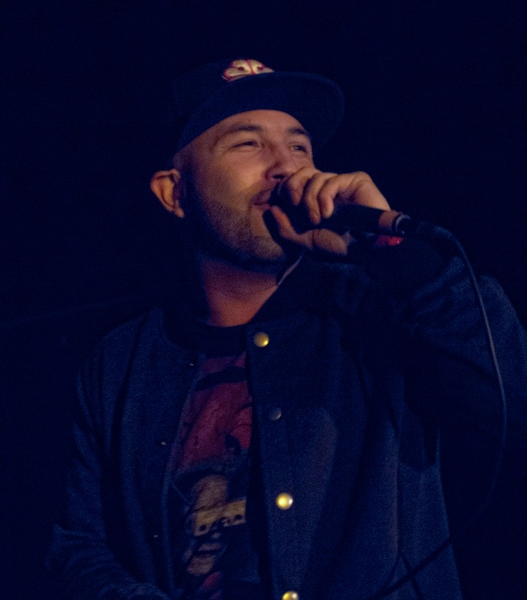 A funny thing happened to Montreal rapper Markings on his way to our interview.

Making his way by public transit from a day job at the office of renowned lifestyle blogger Marcus Troy to our appointment at my Ville Emard crib earlier this week, the sky opened and sent the rains.

Markings (born Mario Reyes Fuentes, 28, and affectionately known about town by his Twitter handle, Shmings), sporting jeans and a sweater as he stepped off the bus, ducked into the nearest dep in the hopes of finding an umbrella to purchase.

Instead he found an empty store.

“There wasn’t a soul in there,” Markings recounted as he arrived, relatively dry, at my place. “I could have robbed the place blind.”

But that’s not Markings’s steez. He instead looked around the place, baffled that no one came running out from the back. He finally noticed a door open to the office, and a little Asian woman, nose to her laptop, oblivious until startled by his presence.

Undaunted, he smiled and asked her if she had umbrellas for sale. The lady, he says, explained that her door alert buzzer must be broken. She spotted a random umbrella in a corner of the small office – possibly once forgotten by a client – and looked at Markings.

“I’ll give you five bucks for it.”

And so off he went, back through the door, the buzzer sounding off behind him.

“I thought she meant it was actually broken, not just the one time,” Markings explains. “So I walk through, and no signal goes off.”

Markings, with a grin, assesses that’s more or less the story of his life, until recently.

You may have seen his name on Artbeat Montreal flyers, read his posts on MIMS and Mook Life, watched him lead a panel discussion at Slang Rap Democracy, or heard his 2011 EP Odd Man Out on your homie’s stereo — or, more recently, his collabo with Loe Pesci, the Narcicyst and Kaytranada, “Mine, Now,” soon to be released on OMO’s follow-up.

But if you’re following hip hop in Montreal, you have heard his name. So what’s in that name?

“My last name is a slave name,” Shmings explains. ‘Reyes’ is just a typical name in Latin America. It isn’t an actual implication of royal ancestry…so I took the first part of my name, ‘Mar’ from ‘Mario,’ and added the translation of my last name.”

“It just fit because, for me, all I really ever did was make a word outta my name. All the other implications just gave me fire to talk about it. I just wanna leave something behind, I guess. I appreciate that sort of artifact-ery.

“The mark, the lasting impression, you know, often isn’t tangible,” he continues.

“I mean, you could write your name a million times, but you could say something and move somebody’s soul or inspire them to think well, right?”

Markings, who opens for California’s legendary Tha Dogg Pound tonight, considers himself a “polarizing” figure locally, which I counter by saying that with his fingers in so many different pieces of the pie, I consider him centralizing.

“I feel like that’s my goal. I’m at a cross-section of a lotta different things in different realms, and I am trying to focus and be a catalyst for progress, and I still have much to do,” he says.

“I still don’t see myself as a central figure, so it’s interesting that you say that. There are people who are slowly becoming aware of who I am and what I’m up to, but not so much because of the music as because I’m everywhere.” ■