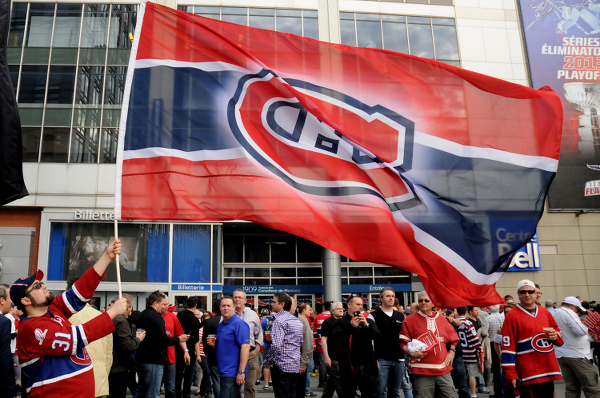 As I sat glued to my TV set waiting for Game 1 against the Senators to begin, I experienced a rather anti-climactic start to the playoffs: a half-assed video montage of the Canadiens’ best plays set to the infamous Puff Daddy and Jimmy Page collab from the 1998 Godzilla soundtrack. Back then it was considered awesome to rap over loud guitars, and the Habs marketing brass is only happy to oblige — 15 years later. Just to put that in perspective, when the song was released, Diddy was still Puffy, and Jimmy had not yet depleted his stock of Clairol for men.

This intro is so uninspiring it makes me wonder why they ditched U2 in the first place and wish that more awesome bands like the Killers and RHCP existed. I mean, there is something so inherently cheesy about pairing music with sports montages, but a better display could have been put together to put the 21,273 fans in attendance and millions others watching at home, such as myself, in a frenzy. I’m fairly certain that Professor X and Wolverine were none too pleased.

As a lifelong Habs fan, it just seems to me that good music and the Montreal Canadiens haven’t found a way to co-exist. Here are a few recommendations on how to fix this problem:

1. Ditching what appears to be an Avril Lavigne “Let’s Go!” voice sample used frequently at home games and bringing back the intro to Blitzkrieg Bop
2. Promising to never ever ever play Limp Bizkit in the presence of a large crowd of human beings ever again
3. Discouraging the fans in attendance to “Making it Clap” via a three-second Sean Paul sample
4. Playing more Stompin’ Tom (R.I.P.)
5. More house organ

I believe this would be a good start — and yes, the Day-O chant needs to stay, because that shit’s brilliant, bro.

Game 1 – Montreal Canadiens vs. Ottawa Senators – Thursday, May 2
The series opener was one for the ages, as it started off as a mild-mannered affair and slowly simmered into a full-blown rivalry once Lars Eller was left bloodied in the second period courtesy of a hit by the Senators’ Eric Gryba. I’ll save you the trouble by not adding a hyperlink to the hit because it’s just not pretty sight and it would demonstrate a “lack of respek,” as Coach Michel Therrien would say.

All you really need to know about this game is that although the Habs thoroughly outplayed and outshot their opponents, they were unable to solve Sens Goalie Craig Anderson enough times to secure the victory. Admittedly, Carey looked like Vincent Price on this night, and two minor gaffes were all the Sens needed to take the 1-0 Series lead.

Game 2 – Montreal Canadiens vs. Ottawa Senators – Friday, May 3
The aftermath that followed the loss was the start of a war of words between Habs coach Michel Therrien, Sens coach Paul McLean and Habs forward Brandon Prust, who resorted to calling his opponents’ coach “a bug-eyed fat walrus” and suggested that he hopes Eric Gryba doesn’t get suspended so he can take matters into his own hands.

I am sure that I’m not the only one who would like to take this opportunity to thank TV personality Marie Pier-Morin for being so beautiful and stealing Brandon’s heart, as his acquisition by the team this past summer has been critical to the team’s success. Therrien even rewarded Prust by designating him an assistant captain for Friday’s tilt.

So the puck dropped on Friday and missing from the previous game’s line-up sheet were captain Brian Gionta, forward Max Pacioretty,  forward Lars Eller, and defenseman Gryba, who was suspended by the NHL for two games for his actions. Both teams managed to keep their emotions in check and played mistake-free hockey for the most part until the Habs were able to bust the deadlock wide open early in the second period with a flurry of goals by Ryan White, Brenden Gallagher and Michael Ryder. This proved to be enough for the Habs to secure the win and tie the best-of-seven series at 1—1.

With Game 3 now set in the nation’s capital on Sunday night, I’m interested in seeing what type of pre-game ceremony the marketing gurus of the Sens army will have in store for the fans. Using an outdated Diddy track was weak, but it can’t possibly be any worse than this atrocious display of acting by a Gerard Butler wannabe from the 2008 playoffs. ■