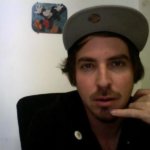 I’m on my way to the Great Escape in Brighton, England. First stop: Heathrow-Up Airport in London. I decided to stay the night in Chelsea ’cause Suuns & Valleys from Montreal were playing a sold-out gig @ XOYO. I made my way in & was quick to find buddies & free drink tickets.

This was Valleys’ first show in London, so I felt lucky to be in da house. You can tell Marc hadn’t washed his hair in weeks, but they showered us with songs that took us to their Valley of the shadow of death and cured my jet-lag with swag.

Suuns, on the other hand, have played their fair share of shows in London — they really charmed the U.K. early on & built themselves a pretty dedicated following up in Big-Ben town. At their show, I was graced by the presence of my buddy Paul, ex-editor at NME but now @ Q magazine. He was drooling over Suuns before my Montreal mates even knew this band had hair on their bollocks.

Speaking of bollocks, I left London ’cause I’m not that big of a fan. Too big, too busy and too much noise. I decided to head straight to the city by the sea where that crap gets replaced with the beach and the sound of seagulls, and where there’s no traffic.

This was my fifth visit to the Great Escape in Brighton. The beach here consists of rocks instead of sand. In North American terms, it’s like old-school Atlantic City, as opposed to Venice Beach, except that you’ll run into San Francisco vibes ’cause of all the lesbians over here. I heard it was the lesbian capital of England or something. The film Quadrophenia was filmed here, but I’ve never seen a single mod kid around. The weekends here reminds me of Reykjavik, ie: Drunk Vikings taking over the city while the police are practically invisible. But no Icelandic Vikings here. The majority seems to be douchey rich-kid students. You can drink anything & anywhere as long as it’s not in a glass container. From every corner of my eye, I could see some Brit rolling a fag (cigarette, bro!) or eating fish and shits.

The Great Escape’s legendary co-founder happens to be my boss & mentor, Martin Elbourne. He’s got a résumé the size of P.K. Subban’s stick [Ed. note: that’s racial profiling, but I like it.] He was once the U.K. agent repping the Smiths, New Order and Rough Trade Records, and then became a festival programmer for various festivals in the U.K. and India, including England’s biggest festival, Glastonbury. He is the co-founder of M for Montreal and it’s an honour to have him so involved with and passionate about our fine city. He loves Canadian music in general, but feels that Montreal is the sexiest city in the world.

Like all other festivals, the drinking starts after breakfast, so bear with me through the blurry bits. This year, Iceland Airwaves partnered up with M for Montreal to showcase Oyama & Hjaltalin, Elisapie & Ain’t No Love. Oyama keeps shoegaze alive and kicking, fresh, fuzzy, bright and dirty. They’ve got that Iceland trance vibe topped with a tad of ’90s Seattle. Hjaltalin are obviously the next Of Monsters and Men, but with folk substituted by rock, and soul studded with little stoner peaks.

From here, I hit the shower & took off to yet another M for Montreal gig, this one co-presented with Brooklyn Vegan. I bailed out of my own gig during How to Dress Well so I could go support Montreal’s Mac DeMarco up the street. Mac’s showcase was packed, but he made me a roadie in order to get in from the stage — I had a great view while chugging six tall cans of Red Stripe.

I made it back to our show to catch more Montrealers, namely Blue Hawaii. Seeing both those bands made me feel right @ home, so I got too wasted to even remember the other bands. Let’s just say it was holy — it was held in a community church. It made me feel 14 again, but they had a bar, so I’m going straight to hell. I left this gig with six blonde ladies & convinced them to follow me to end the night with Ottawa’s A Tribe Called Red. Next thing you know, I blacked out by the beach along with a shitty pre-packaged chicken salad sandwich on wheat, with bird-shit dressing. ■

Check back tomorrow for the conclusion of Mikey’s Brighton adventure.