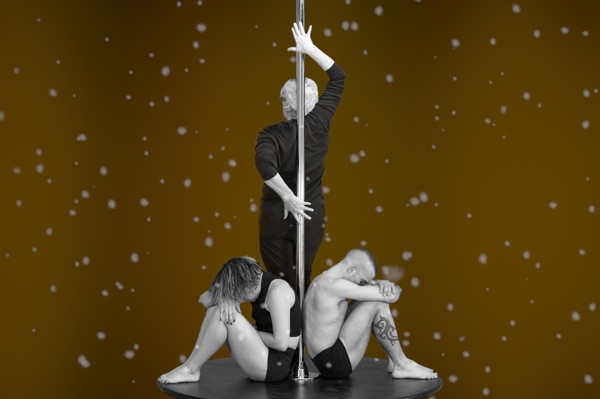 Sarah Lefebvre, Janice Perry and Jean-Mathieu Ledoux in Memoirs of a Pole Dancer.

When German video artist Philip Bussmann was introduced to Montreal last summer, he was taken for long walks through the Quartier des Spectacles — and was struck, as so many tourists are, by the proliferation of the famous Montreal gentleman’s clubs.

Not only were they numerous, he remembers, but they were friendly and inviting. You could almost meet your friends for a beer after work in one of these strip clubs before heading on to a birthday party whereas in Germany, nobody but sailors appreciated the lust-dance. So when the Goethe Institut of Montreal later commissioned Bussmann to create video art to animate the window fronts of their new locale in the heart of the Quartier des Spectacles for the opening of OFFTA, Bussmann’s first thought for the work was to exalt the pole dancer.

“One of the things I discovered on my walks through central Montreal, and occasional visits to these clubs for research,” says Bussmann, “was that this old-world, sort of romantic way of ‘seedy’ living is being supplanted by the growth of ‘high art’ in this downtown neighbourhood. Part of my idea with the video work, as it came to me when the commission was presented, was to play with these two oscillating dynamics, the decline of the gentleman’s club in relationship to the rise of high art and art spectacles in the Quartier des Spectacles.”

My intention as your journalistic guide was to write a preview of this fascinating work, entitled Memoirs of a Pole Dancer, but Bussmann’s long history of working in theatre means that he believes strongly in art’s spontaneity and truth being revealed as it is made. This also means that the work is not finished and that there is nothing to review or preview, yet.

In a few days the oeuvre will be broadcast on large street-level video screens that will animate the façade of the Goethe Institut headquarters, and passers-by will be invited to stream the monologue with audio onto their smartphones so that they can interact very intimately with the art from their hand-held communication toys. But today my long entretien with Bussmann consists of many nuanced explorations of what this work might be. Neither he, nor I, can really say.

The work consists of an installation of three intermingling videos on loop, one of a young female pole dance performed by Sarah Lefebvre, one of a young male pole dance performed by Jean-Mathieu Ledoux and one of an older ex-pole dancer of uncertain gender who combines the essence of the two younger dancers, reflecting in monologue on her/his previous pole dancing life while performing domestic duties at home in Vermont (performed by Janice Perry with voice altering).

“I have shot the two dancers,” he confides. “This was done on lock-down tripod to give their performances a slightly distanced effect. Like the real pole dancers always seem to be on stage, holding their distant promise. Tomorrow I will shoot the monologue, which is where the reflections will be. [Janice Perry] and I have talked about the ambiguousness of the voice, which I will treat electronically, along with the music, which I always compose with whatever background noise I pick up while shooting. There is no fixed text. Janice will improvise as she moves around mowing her lawn, cooking, reading, taking a bath. The ideas of this work are layered, I don’t know how they will come out, but I am interested in nostalgia and regret, what age does to the urgency of dreams, sexuality as commodity, gender unspecificity and the wielding of control: who is in control and who is giving up control in a pole dance setting? Is the pole in control or the dancer? Is the dancer in control or the person who is paying for the dance?”

Bussmann also likes the idea of the pole as a symbol — a “proxy penis,” he calls it.

“I was intrigued while visiting clubs for my research, about how differently the men and the women related to the pole.” While going door to door through the Quartier des Spectacles, from traditional heterosexual pole dancing clubs to gay pole dancing clubs to a gay pole dancing club with a Girls Night on, the artist discovered that, “with the girl pole dancers, it was very clear that the pole was masculine, even though I’ve heard many stories about the pole being the inheritance of less charged themes such as circus tent shows or Chinese acrobatic performances.

“It is important too, I think, to celebrate the romance of the dark side, [of] which we get a snapshot of in the old art of burlesque-style dance. Today you can take pole dancing aerobic classes and there is talk of pole dancing becoming an Olympic sport. This implies that it is being ‘cleaned-up,’ when the thrill of pole dancing is really in its seedy roots and the idea that it is provocative and big and questionable.”

Known for complexly layered, movingly abstract, visceral work, Bussmann’s frolic with the ghosts of Montreal’s strippers promises to be unforgettable. ■