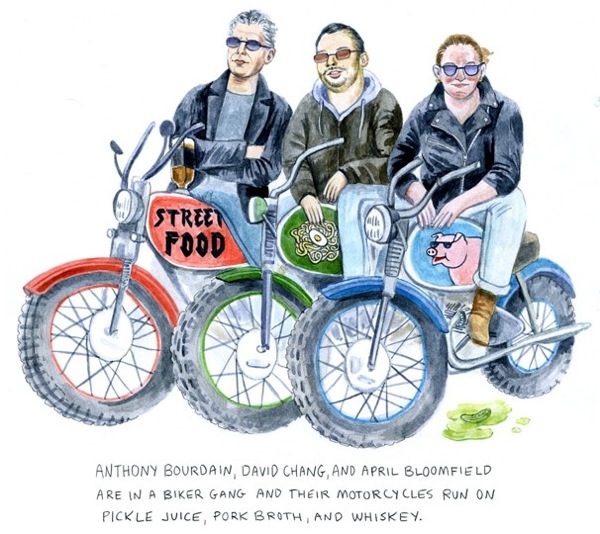 From Lisa Hanawalt’s “The Secret Lives of Chefs” series.

Lisa Hanawalt may not be a household name yet, but give it time. She’s provided “op-art” comic editorials for virtually every media outlet of note, from McSweeney’s to Vice to the New York Times, as well as illustrating several children’s books, accumulating a slew of awards and, with Michael Kupperman, providing the artwork for Kristen Schaal and Rich Blomquist’s sex-book parody The Sexy Book of Sexy Sex.

Hanawalt has a gift for composing tight, funny one-panel narratives that somehow tap into the zeitgeist and beg to be memes  — see her James Beard-award winning “Secret Lives of Chefs” series for compelling proof. She somehow manages the near-impossible: rendering caca-peepee-butt humour, frank sexuality and silliness in a way that is totally smart and strangely beautiful.

In My Dirty Dumb Eyes, a recent collection published by Drawn & Quarterly, the NY-based artist treats fans to a cross-section of her work so far. The brightly coloured volume includes one-off single panel jokes, but there are also several lengthy film responses, including a great take on Drive (“I liked [Ryan Gosling] in The Notebook, Half Nelson, Lars and the Real Girland Google Image Search”), diary-like chronicles of her domestic life in which she is drawn as a moose and her partner a cat, plus what is apparently a post-wedding thank you letter to everyone who contributed to her gift registry showing them using various household appliances they received as sex toys.

Hanawalt also delivers a few absurdist fashion stories, such as galleries of meticulously rendered wild animals in surrealist hats (a nod to Elsa Schiaparelli?) and “Rumours I’ve Heard About Anna Wintour,” including that “she’s a closeted chubby chaser,” has her assistants incubate the ornate ostrich eggs she lays instead of pooping and secretly shops at Forever 21.

In short, Lisa Hanawalt is the shit. She answered a few questions about her work via email.

Emily Raine: How did you get into the “op-art” business?

Lisa Hanawalt: Totally accidental, I think it just conforms to the way I think of ideas for drawings and comics really well!

ER: What’s the appeal of using animals (often in human clothes) to tell stories in your pictures?
LH: I love animals and think about them all the time, especially horses, so they are always the most interesting and fun thing for me to draw. They have such distinct personalities, it feels normal to draw them as people. You’d think I’d be a vegan, but nope! 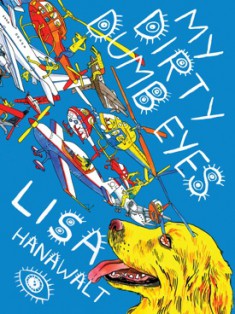 ER: I dig the self-deprecating title, especially since I think the dirtiness and dumbness is what’s so appealing about your work. Would you describe yourself as a self-hating artist?
LH: It’s pretty cliché now, but yeah I am pretty self-loathing. It’s a good way to balance out how narcissistic and selfish I have to be to do what I do!

ER: I see sort of two main styles in your images: strong-thickly outlined bold images, and the softer, more amorphous watercolours. What factors into your decision to draw a picture in one or the other style?
LH: I like switching back and forth but lately I’m leaning towards working with a looser style. And it depends on the subject matter and what will subvert expectations the most – for a piece about something traditionally pretty, like a wedding, I’m going to use a rough/ugly approach. And for something really silly, like animals in hats, I think it’s more funny if I draw it with a hyper-realistic style.

ER: What led you to start doing the comic film reviews?
LH: I was watching Transformers 3 with my brother and it was such an intense, entertaining-yet-extremely-unpleasant experience that I thought at the very least I should make a funny blog entry about it. My friends immediately responded to it and demanded that I do more movie reviews, so I complied!

ER: Are you going to do more chef profiles? Those are so awesome.
LH: I don’t have any specific plans, but the food industry is so interesting to me I have no doubt I’ll make more work about it! ■ 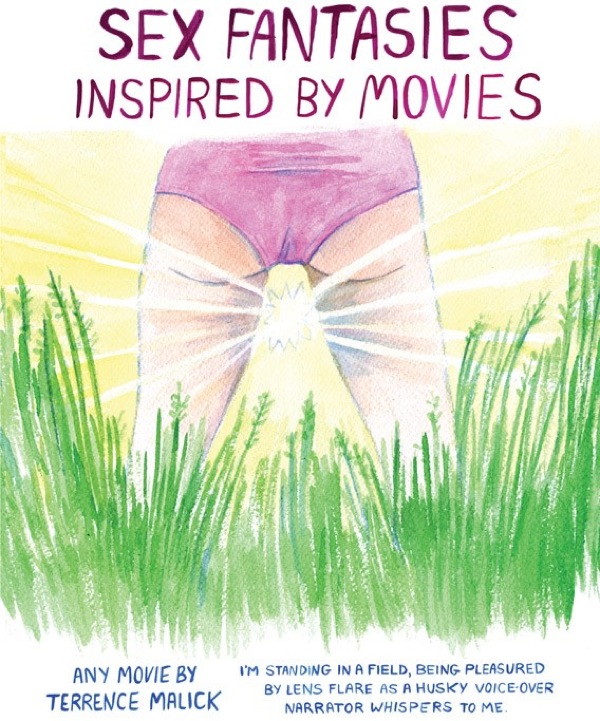