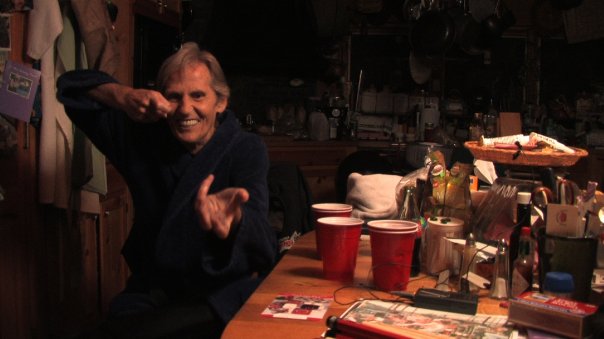 Levon Helm in Ain’t in It for My Health

Levon Helm is a music legend. In Jacob Hatley’s documentary Ain’t in It for My Health, we are given a tiny window into Helm’s life several years before his death in 2012. Helm was the drummer and sometimes vocalist for late 1960s rock group the Band, who were famously Bob Dylan’s backing musicians and were also immortalized in the 1978 Martin Scorsese documentary The Last Waltz.

Helm was diagnosed with throat cancer in 1998 causing him to lose his ability to sing. Once in remission, he was able to start performing again which led to the release of several albums as of 2007. Ain’t in It for My Health documents that latter-day creative period.

The film definitely has a “fly on the wall” approach. We simply observe Helm discussing stories about his youth, view him checking the state of his throat in doctor’s visits and chatting to guests at his home. My major complaint is that although at times engaging, the film doesn’t really offer much to a new audience. If you’re aware of the Band and are already interested in Helm, the film is interesting and moving. But for anyone approaching the film without prior knowledge, it has great potential to fall flat. It’s not the kind of thing that will encourage and create new fans. It actually made me lean in to my screening companion and say several times “trust me, that man is great,” instead of the film just speaking for itself.

I don’t necessarily feel that this distance was caused intentionally by Hatley — more so by Helm’s disdain for fabrication and gimmicks, which we see in the film, and is likely at work here. You’ll not get teary heart to heart interviews but you will see intimate performances including Helm singing “In the Pines” to his young grandson.

Ain’t in It for My Health is a piece of history, an opportunity to freeze time and savour a world in which Levon Helm still exists. It’s not riddled with overtures about his greatness and cinematic tricks to cause chin quivers, it simply observes a living legend before his time was up. ■