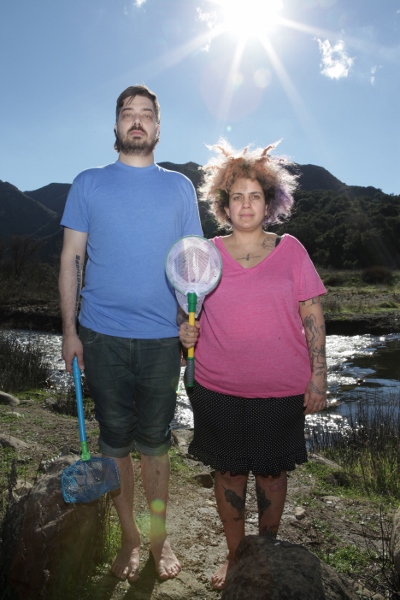 The Uncluded. Photo by Chrissy Piper

The Uncluded is a story about an ex-Def Jukie and current Rhymesayer whose name is synonymous with independent rap and a sickly-sweet “anti-folk” singer. Together they created 2013’s most avant-garde hip hop album yet, facing personal pain and anguish over death and loss along the way and bonding over an imaginary word from a made-up dictionary: to “unclude,” or “keeping things that you don’t appreciate out of your life.”

They also caught a frog and wrote a children’s book about it for their album sleeve with their other friend, illustrator Travis Miller, who also turned them into octogenarian-ish, Smurfy cartoons for the cover art of their debut LP, Hokey Fright.

Early into their first official tour together, Aes and Kimya — neither of them total strangers to Montreal, nor regular visitors, to be sure — bring the sounds of their collaboration to life in Montreal this weekend.

Here’s what they had to tell me by email last week.

Darcy MacDonald: Rather than ask how you met and started working together, I think it would be really fun if you would both make up an origin story and let the reader pick their favourite.

Kimya Dawson: It was basically exactly like that scene in The Fox and the Hound where Todd and Copper are both wandering alone in the forest. They catch a whiff of each other, introduce themselves, and — contrary to what other folks think about the probable incompatibility of these critters — a game of hide and seek is started. Yup. We were in the woods. He detected my stench and tracked me down.

Aesop Rock:  In 1981, I pulled a writhing, scaly creature from a giant crack in the ground 40 miles outside of Detroit. It was a predator of sorts, but obviously hurt and in need of some help. I cleaned and nursed said creature back to health. One day it cocooned itself for what seemed like months. At one point I almost thought it was dead.  One autumn morning I woke up to see that the cocoon had cracked, and a new being had been hatched. That being was the Uncluded LP Hokey Fright, available now on RSE.

DM: With reference to the influence of loss and death on this record, why did you feel this was the right project with which to examine the world of questions without answers so overtly?

KD: I’ve never really believed I had all the answers. Life is hard and confusing sometimes. Whenever I think I have it figured out, things are usually quickly flipped upside down. I’ve always combined a lot of different feelings into the same song, because songs are just how I process the big jumble of stuff happening all around me.

With this project in particular, it felt like we were both just taking turns trying to lift each other out of a grief hole. Sometimes with deep conversation, sometimes by making each other laugh, mostly just by being each other’s friend. Sometimes just having a good buddy helps even if you both feel pretty lost. This album to me is a couple pals just being in it together.

AR: Yeah, I’ve never been an answer-guy. This album may have helped magnify that, because Kimya is similar. She talks it out in her music. I try to do the same. Knowing someone who writes like that has helped me see it in myself.  I don’t like to write preachy material where I say, “I’m right, live your life like this…”

But I don’t mind saying, “Here’s what’s wrong, realistically I have these options…help…” in a song. That feels pretty familiar.

DM: What sort of general interests and appreciations do you guys share?

KD: We like nature, hanging out in the woods, exploring a swamp. We like crafting — we do a lot of crafting. We also like going to zoos, aquariums and science centres. We spend a lot of time speculating about what’s going to happen on Game of Thrones.

AR: I like drawing and making art even though I’m not very good at it, so any chance to get creative with a pencil is fun for me.  Kimya makes paintings, too. Yeah, pretty much anything to do with creative shit and animals.

DM: Please also tell me about the frog leaping around in the Get Familiar series. What’s its story?

KD: That’s Dough-boy. Aesop found him outside on my kitchen windowsill one night. We brought him in for an epic battle with a Playmobil guy named Little Ian. They fought it out for a minute then Dough-boy surrendered and was returned to where he was found.

DM:  You’ve both said you were happy to work within each other’s genres — Kimya’s mantra was “it’s perfect.” Aes, did Kimya make you smile when she’d hear how you were flipping it hip hop? Kimya, for that matter, does the end result make you smile?

KD: This album makes me so absurdly happy.

AR: Sure. I mean, yeah, we like making songs together.

DM: How have your respective fanbases taken to the record and performances so far?

KD: I’ve had hip hop fans tell me that they’d never listened to acoustic music before, but they like what we’re doing together so they were gonna check out my stuff too. And I’ve seen young teenage indie fangirls dressed like Hello Kitty have their minds blown by Aesop. It’s cool to see people across the board being open to this.

AR: Yeah, I mean there are naysayers, but it’s so worth it to have the few who realize that what me and Kimya do isn’t all that different on a lot of levels. On this upcoming tour we can see how it all translates in a live setting, but the performances we’ve done have been fun.

DM: Please tell me a bit about the live show, about what Montreal can expect.

KD: It’s the two of us and our pal James Lynch. We use an iPad and an assortment of instruments to play the songs. No pyro, no insane light show — us and our songs. Some of it is poignant. Some of it is goofy as hell.

AR: Yeah, not much frills. But it is fun for me to be in a “band” of sorts. I don’t play any of the instruments, but I’ve never been on stage with anything other than a DJ, so it’s kinda new to me. ■