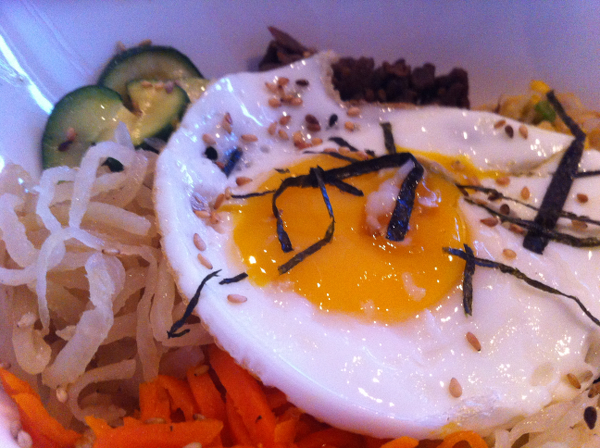 Chingu does not have location going for it. It sits on a mysterious stretch of Parc, next to Mile End’s sole strip club, above an empty storefront and in the space previously occupied by the luridly lit Queen Sushi. I had never set foot in Queen Sushi (had anyone, really?), and I didn’t particularly want to step into the heir to its throne.

But since Korean cuisine is somewhat of a rarity not only in Mile End, but in Montreal, I got over my qualms — and I’m glad I did. Sure, the nearby Omma has a cuter space and does nice things with homestyle cooking, but Chingu is something different. It offers a standard, satisfying and inexpensive Korean restaurant experience, and in this Asian-cuisine-starved neighbourhood, “standard” is a compliment.

Chingu’s menu mainly features the classics, and that’s what my dinner companions and I stuck to: a seafood pancake to start, the requisite bibimbap, bulgogi, beef kalbi, soondubu jjigae (a spicy tofu and seafood stew) and (because a companion squeamish of red meat demanded it) dakdoritang, a stir-fried chicken dish with vegetables.

We were served, as custom calls for, a small banchan spread of kim chi, soy-sauce-marinated potatoes and addictive black beans in a sweet sauce. The seafood pancake, which came next, was one of the highlights of the meal. Gigantic, eggy and generously sprinkled with chunks of octopus, the lightly fried appetizer and its scallion-sesame-soy dipping sauce convinced us once and for all that Chingu was legit.

Our mains arrived in quick pursuit, the kalbi still sizzling in its cast-iron skillet and the jjigae bubbling in a ceramic cauldron. We ordered the beef kalbi because the pork (spelled “galbi” on the menu) was sold out. The dish — short ribs marinated in a sweet soy-scallion sauce and then grilled — was the undisputed champion of the meal. The bulgogi and jjigae, however, fell short in flavour, though the stew was still pleasing, with its toothsome bits of soft tofu and seafood. The fried-egg topped bibimbap was perfectly decent but unexciting. It came with a squeeze bottle of gochujang, a hot chili paste, which I’d recommend using liberally to ramp up the dish.

Chingu purports to be a lounge, and stays open until 2:00 a.m. on Fridays and Saturdays. The food — especially the meat — lends itself to drinking, and the restaurant has a full bar, including soju. But on a Thursday evening, most of the tables sat empty. The only sound, besides my tablemates’ conversation, came from YouTube-streamed K-pop idols crooning softly from giant screens. ■