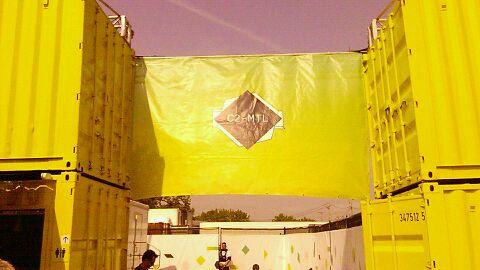 In a converted shipyard building in Griffintown, members of Montreal’s creative class networked, dressed fashionably, sipped David’s Tea and basked in the glow of their business betters for three intermittently stormy days at the second annual Commerce + Creativity conference, better known as C2-MTL. And they paid anywhere around $3,000 a head for the privilege.

Correctly predicting the most obvious question on everyone’s mind, C2 brands itself as “a business conference, only different.” What does that mean, exactly? It wasn’t a gathering of starch collars at Place Bonaventure, obviously, but it wasn’t a bunch of technocrat hucksters spilling Dom Perignon on their Google Glass devices while riding diamond-encrusted Segways either. And there was no hot tub.

In reality, it was a fairly normal conference, albeit tailored towards Montreal’s powerful creative cloister, which encompasses the many trendy companies here who do artful things but make serious money, too, like Cirque du Soleil, Ubisoft, Moment Factory and C2 organizers Sid Lee (who, in the interest of full disclosure, I sometimes work for). So, sure, Whole Foods co-CEO John Mackey still delivered the same PowerPoint presentation (complete with mnemonic devices) and hawked the same book he would have at SnoozeFest in Topeka, but in Montreal, he got a theatrical, biographical introduction delivered by a Cirque clown in a Beetlejuice suit and a light show befitting last month’s Muse concert. The preamble may have been different, but business is still business.

Speaking of Mackey, his talk was a good primer on how antiquated corporatespeak has been given a microfibre cloth scrubbing in recent times. “Culture eats strategy for breakfast,” he said to knowing nods and a few woos. I’m still trying to chew on that phrase. He also frequently repeated that in terms of big corporations, “love is in the closet,” and his PowerPoint un-ironically had “caring begets caring” as a bullet point. A little less Gordon Gekko these days, and a little more Oprah. Like this year’s big keynote, Richard Branson, who is for whatever reason considered the archetypical cool, caring rich guy.

As there were many speakers of every stripe, I hate to harp on Mackey exclusively, but the two fashion trailblazers that followed him on the day I attended — Bobbi Brown and Diane Von Furstenberg — acquitted themselves much better by just telling their life stories. Mackey’s talk reflected how so many speeches at C2 came embedded with retweetable catchphrases, most of them nonsensical but aggressively captivating.

Still, there’s always something to be gained from listening to smart, eloquent and successful people. I don’t even know what a wrap dress is, yet I was in awe of Von Furstenberg’s unflinching conviction and directness, and Brown’s story could serve as inspiration to anyone looking to start a home business. But in less capable hands, corporate lingo can come across like unscripted pro wrestling braggadocio to the uninitiated, and for every genuinely interesting person with wisdom to impart, there are a few hobnobbers on fatboys, whittling their endeavours down to a few buzzwords.

Perhaps a more descriptive slogan for C2 could have been: a better version of yourself is standing right next to you. Whether it’s an invaluable contact you’re destined to meet, a statuesque stranger you aspire to be or a line delivered by a speaker that stayed with you, C2 is a business conference through and through, which means you go in the hopes of having some star lustre rub off on you. People can fraternize anywhere, but for three grand, one hopes for a better stock of dancing partner.

As for the beleaguered word “creativity” and the backflips it did over the course of the conference, it was used both in reference to coming up with ideas and their subsequent implementation. Corporate culture was also discussed as something necessitating those creative juices. It seemed slightly odd to me, but for most of the people there, it appeared as though the presenters were speaking their language. ■