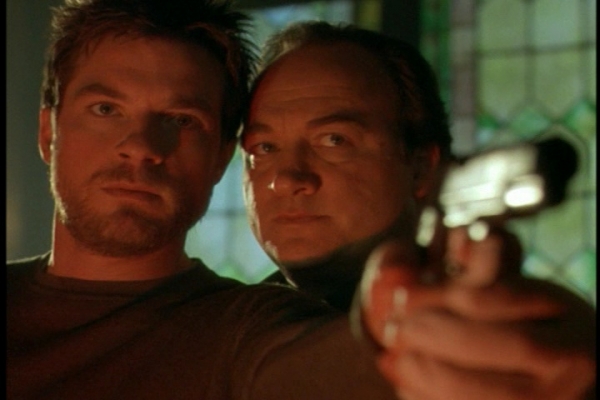 Jason Bateman and James Belushi in One Way Out

Does Montreal play itself?: It’s unclear. While the setting is never explicitly named, the street signs have not been changed (although dialogue refers to nonexistent ones) and Guylaine St-Onge has a prominent French accent that’s never explained. In a historical Made in MTL first, an STM bus stop is prominently featured. The lack of real identifiers would lead me to believe this isn’t Montreal, but what the hell, maybe it is.

Most egregious local landmark: The movie opens with a tracking shot down de la Gauchetière in Chinatown that tracks past Beijing and into some other restaurant that isn’t Beijing. There’s also a scene that appears to be shot on Île Sainte-Hélène looking out at the city, but it’s coated in a thick curtain of fog.

Notable local talent: It’s a veritable who’s who of local character actors as only the leads are non-local. Highlights include Larry Day as a snooty rich money lender who kicks Jim Belushi in the balls, Danny Wells once again appearing as the salty police detective (he more or less fills the same role in Swindle) and local jazz singer Amanda Strawn as … a singer in a jazz bar.

A long, long, time ago, before you could do such mind-boggling futuristic things as watch television on your phone or choose which Simpsons episode you want to watch, the world often made a clear distinction between film actors and television actors. One couldn’t move willy-nilly from one to the other; you needed to graduate to films or fail into television. Even when that happened, audiences usually could not wrap their minds around the fact that the loveable urchin/cranky grandpa/plucky gal they saw getting into a hijinx every week was somehow playing a different person.

As the 90s rolled around, many saw a golden opportunity to reinvent themselves for audiences through edgy, violent independent films that suddenly saw beloved screen icons portraying pimps, drug dealers, prostitutes and murderers. For every Travolta-esque comeback story, however, you have something like One Way Out.

The 90s were not kind to 80s teen heartthrob Jason Bateman. Struggling with addiction issues, he saw a series of sitcoms die on the vine in their first year. His theatrical output amounted to little more than a handful of cameos in movies best left forgotten, like the French Stewart vehicle Love Stinks. It’s presumptuous of me to assume that Bateman signed on to the Montreal-shot Jim Belushi vehicle One Way Out in the hopes that it would suddenly see him taken seriously. This would be assuming that Jason Bateman has the worst judgment in the world (and also that he somehow never heard of Jim Belushi). Yet, this story has a happy ending that we all know – Bateman fell into the good graces of the Hollywood comedy elite, was cast in Arrested Development and became the preeminent comedy everyman. On the day before his triumphant return to the world of the Bluths, let’s explore one of Bateman’s less-proud moments.

Harry Woltz (Belushi) is the department’s best cop, a tough as nails no nonsense officer that coincidentally shares the same proclivities as Belushi in real life: a fondness for jamming on his harmonica, smoking cigars in a XXL House of Blues T-shirt and spouting such sitcom-dadisms as ‘stick a fork in me, I’m done.’ Despite his reputation as the best cop in the business, Woltz is heavily indebted to the Russell brothers (played by Mike and Angelo Tsarouchas), who come up with a so-called perfect crime for payment.

Woltz has to train a milquetoast named John Farrow (Jason Bateman) to murder his own wife, Evans (the late Guylaine St-Onge), a fierce femme fatale who knows too much about the Russells and whom Woltz has had a back seat tryst with days before (yes, this film contains the despairing notion of a Jim Belushi sex scene). If Woltz doesn’t comply with the plan, the Russell brothers will off his former partner (Angela Featherstone), a resourceful detective who desperately wants Belushi to notice her. When the deed finally goes down, Woltz is immediately tasked to assist with the case, pitting him in a war of wits with Farrow and the police department.

There’s only one thing Jim Belushi has ever been convincing as: a slobby, dunderheaded, beer-swilling he-man who wipes his ass on the carpet and whines when his wife asks him to take out the trash. He’s not particularly good at it – but when I see his lumbering figure on-screen, I am unpleasantly reminded of his reign of terror on primetime TV. In One Way Out, Belushi simply transfers his thinly-veiled blue collar Joe persona to that of a highly intelligent, seductive ubermensch without changing a single thing.

It may well be one of the most bizarre, ill-advised miscastings I’ve ever encountered in my years of watching low-rent movies like this. To say that Belushi isn’t trying would imply some sort of comprehension on his part that he’s in a movie; instead, it truly looks like one of the film’s electricians somehow conned his way into becoming the lead of the film and no one noticed. He plays seductive as if his target was a plate of hot wings, and his badass outbursts could very well be directed at DirecTV fucking up the reception of the football game.

The central conceit of One Way Out isn’t actually that bad; movies billing themselves as neo-noir that actually have a classic film noir plot (femme fatale, patsy, the whole deal) at their center are few and far between. It does fall victim to the typical pitfalls of the low-budget crime genre: anemic slow motion action scenes abound, as does lazy storytelling that deliberately withholds details in order to push ‘twists’ at you every twenty minutes. If someone else was in the lead, who knows, it might be a perfectly serviceable little B movie. Leave it to Belushi’s hangdog, take-my-wife-please persona to ruin even that.

Bateman’s character is curiously similar to his Michael Bluth (albeit covered in a layer of peach fuzz), but it goes all but unnoticed with a titanic ham (figuratively and, I’m willing to posit, probably as close to literally as is possible) like Belushi front and center. Even Montreal takes a backseat to his shenanigans, reduced to a handful of alleys and big Westmount houses shot from afar. What could’ve been Bateman’s most embarrassing anomaly is mostly stifled by Belushi’s tone deaf, impossibly inappropriate performance. Bateman got away with a paycheck and his dignity intact; let’s hope he bought ol’ Jim a beer. ■