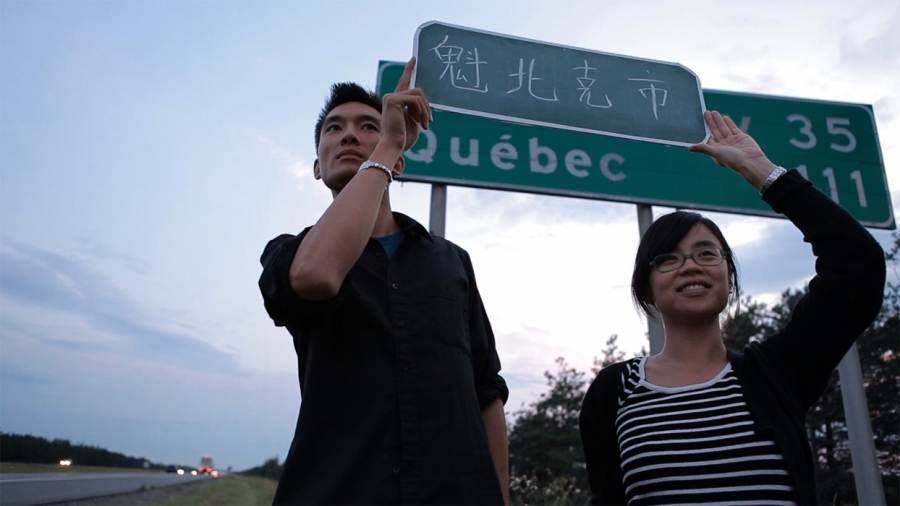 Parker Mah and Bethany Or in Being Chinese in Quebec

Twenty years ago, directors Malcolm Guy and William Ging Wee Dere made Moving the Mountain, a documentary exploring the history of the Chinese in Canada, the head tax imposed on them by the Canadian government and the Chinese Immigration Act, which lasted from 1923 until 1947, separating families for decades. Their new film, Being Chinese in Quebec, shifts focus to the new generation of Chinese in this province.

The decision to revisit issues of identity and race developed out of concern that since 2006, when the Canadian government apologized to the Chinese community for past injustices, the history of Chinese people in Canada would be forgotten. Says Guy, “Does that mean that people are just going to forget about this, or do people even know about it? That kind of sparked us into action again as well as the fact that there was a little funding available at that time so things fell into place. The other film was a look back so [we thought] maybe we can look forward this time and see what kind of place there is for the Chinese Québécois in the future.”

The film follows Parker Mah and Bethany Or as they travel across Quebec speaking to many different members of the Chinese community: new arrivals, fourth generation, those affected by the head tax, some not, some who identify as Chinese, others as Québécois etc.

“We were interested in that idea — were the new arrivals interested in finding out about the history of the people who had been there before them?” says Guy. “There’s always the question of identity and who we are.”

The film offers many surprises and is not only relatable for members of the Chinese community but surely for any visible minorities. It shatters stereotypes, even ones you didn’t realize you were subscribing to — Being Chinese in Quebec is effortlessly enlightening.

“It was an interesting film to make; with a road movie, you never quite know how it’ll go. You have some ideas, but the neat thing were the surprises,” says Guy. ■

Being Chinese in Quebec opens Friday, May 24 at Cinéma du Parc (3575 Parc)