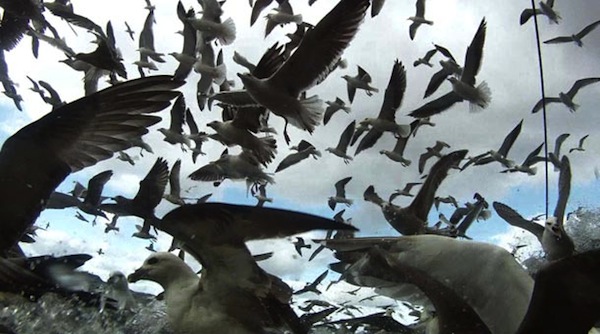 When Lucien Castaing-Taylor and Véréna Paravel’s experimental documentary Leviathan screened at RIDM last November, Montreal audiences were divided: Some walked out of the theatre after 20 minutes, apparently intolerant of the film’s lack of dialogue or conventional documentary structure, while others praised it as an artistic masterpiece.

Either way, Castaing-Taylor and Paravel have created a dazzlingly innovative film by embedding their cameras inside a fishing trawler, allowing their cameras an unprecedented perspective, nestled in impossible nooks and crannies, almost burying themselves in the tackle, impedimenta, blood and flying detritus housed deep within the boat’s belly.

Coinciding with the film’s theatrical release in Montreal, I took the opportunity to interview co-director Castaing-Taylor by email from his home base in Cambridge, Massachusetts, where he daylights as Director of Harvard’s graduate Sensory Ethnography Lab, for further insight into Leviathan’s process and meaning.

Anna Phelan: Leviathan is not a traditional documentary, in that it eschews the conventions of narrative, and instead focuses on the visceral experience. How would you describe this film? Why is it a documentary?
Lucien Castaing-Taylor: It’s hard for me to describe the film, but is it really Véréna’s or my job? I don’t mean this facetiously. Filmmakers are the closest to, and in some respects therefore, the least well-placed individuals to talk about their work. Besides, the temptation is just to regurgitate propaganda.

In any event, what is a documentary, and isn’t the attribution of documentary significance to a sequence of images and sounds something that happens in the domain of the viewer? As a viewer of this film, it feels at once utterly documentary and utterly fictional (on a good day) to me at least.

AP: Are you afraid of alienating the general public with your non-mainstream filmmaking practices?
LCT: No. We’ve never had a public, so how can we be afraid of them? The world is so inundated with media that just goes in one ear or eye and out of the other that there can be little justification for producing any more of the garbage. The only possible excuse is to make something that hasn’t been tried before, that shows us the world in a way that takes us by surprise. Conventions congeal, they become blinkers not just of genre (“traditional documentary” or whatever), but also of perception.

AP: Commercial fishing practices have been widely criticized in recent years, and several noteworthy documentaries on the subject have gained acclaim and popularity (Darwin’s Nightmare, The Cove, and The End of the Line are some examples). Would you put Leviathan in the same category? Does your film have a political message?
LCT: The film’s politics are tied up in its poetics. Isn’t it up to the critic, not the maker, to interpret them? We wouldn’t bother making films if we had some way of expressing with words what we’re trying to achieve with the film. The films you mention are all works of issue-based agit-prop, aren’t they, which Leviathan probably isn’t. In any event, fishermen in Canada and the US, and on the other side of the Atlantic, spent a long century — more or less from 1850 to 1950 — clamouring for government restrictions on new fishing practices, which they saw as destroying the ocean, and the governments and the rest of the world failed them utterly, again and again.

So it’s a bit rich — basically it’s utterly obscene — for non-fishermen to turn around and take them to task for declining fish stocks, when for 100 years fishermen, in the face of every new technology (like the invention of long-lining in the 1860s, of gill nets in the 1880s, of trawlers in the 1920s and 30s, etc.) warned about its rapacious consequences and begged for better rules and regulations that would permit some form of sustainability. Governments and marine scientists and environmentalists have succeeded only in rendering fish and fishermen alike extinct.

AP: Regarding the logistics of Leviathan: How did you and Véréna gain access to the boats, and the multiplicity of their activities depicted in the film?
LCT: Véréna and I started going down to New Bedford in the winter of 2010-11. Initially we thought we would make a film about the town — former whaling capital of the world, mythic port of Moby Dick, since fallen on hardscrabble times, you know, the typical liberal documentary gibberish. Then we started going fishing in 2011, and were so taken with the experience of spending weeks at a time out on George’s Bank that we knew everything to do with the land paled in comparison, so from then on, for all of 2011, we just filmed at sea.

AP: What are your hopes for Leviathan, in commercial release?
LCT: None. Our only hope was to finish something worthwhile, at least worth our and the fishermen’s while, once we’d started it. We never think about audiences, it kills you. I guess if people leave the theatre shaken up, or feeling they’ve seen the sea, or fishing, or fish, or humanity, in a new way, that’s not a terrible thing.

Leviathan screens at Excentris (3536 St-Laurent) from April 5-11. Co-director Castaing-Taylor will be in attendance at the screening tonight, Friday April 5, to introduce the film and answer questions from the audience.