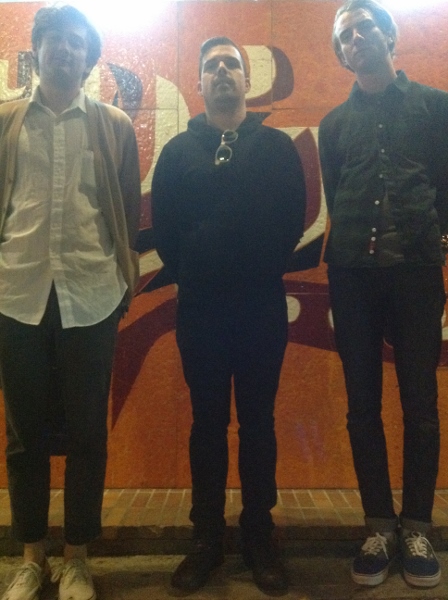 Local austere rockers Reversing Falls are a squealing guitar band in a time where it’s slightly unfashionable to be one.

Like Weezer’s blue-hued debut — an album Reversing Falls frontman Tyler Crawford purports to have heard over 500 times — his band’s eponymous first full-length is wall-to-wall catchy, single-calibre pop-rock ditties trimmed of any unnecessary fat. The only exceptions are the last two, slightly breathable tracks, meant to show off the band’s studio chops. No eight-minute-long “Only in Dreams”-esque epic, though. The longest track still only checks in at 4:20.

In a recent conversation with singer/guitarist/Twitter celeb Crawford, we discussed bringing back big vocals, the glorious ’90s and the band’s infallible fourth member, trusty drum machine MPC 1000. That being said we should probably mention their quasi-fifth member, real-life drummer Jamie Thompson (of Unicorns fame), who guested on a pair of tracks. Oh, and while we’re at it, give a hand to the two actual other members of the band: bassist Jesse Ash and guitarist Charlie Neufeld.

Erik Leijon: Was two years a longer time than you thought it would take to finish the record?
Tyler Crawford: I was really nitpicky. I wanted the vocals to sound exactly like I envisioned them and all the annunciation of the words to be right. It may come across that we’re not super-duper ambitious in certain ways, because we’re not trying to conquer the world with this guitar-based rock band. I’m more obsessed with the idea that when a record is done, it’s like that forever, so I wanted it to be right.

EL: What was it about the singing you wanted to be perfect?
TC: When I listen to music, I think about the singing and the person doing it. The vocals are pretty loud on the record, and that’s definitely on purpose, because I don’t like when vocals are buried. I want to connect with the person who’s singing, and I think for a lot of people who are non-musicians, the singing is the most human aspect of it. For the longest time I fell into the trap of being obsessed with guitar sounds and focusing on that, and now I feel like my guitar is always going to sound the same, regardless of which amp or guitar I use. It’s partially obsessive compulsive tendencies as well — I’m willing to admit that’s a factor.

EL: Does the album sound like the ’90s?
TC: Not on purpose. A lot of that is pretty formative, like from my formative years of playing guitar and learning to write songs, in the time of Weezer and Nirvana. I like the radio hits, too, like Third Eye Blind and Everclear, but there are aspects to those songs I don’t like too: some of them are too long, or have a shitty bridge or a rap-rock breakdown, know what I mean? We’re taking the good parts. Some of it was consciously taken too: there’s a song called “I Think We Have a Problem,” and that line is taken from Everclear’s “So Much for the Afterglow.” I like when songs have little references in them — that’s my fun inside joke with myself about my own song.

EL: Has the MPC 1000 drum machine become integral to Reversing Falls’ sound? Was there any thought to having Jamie Thompson play drums on the whole record?
TC: We’ve gone through cycles. In various forms we’ve had this band for five or six years, and we started with a drummer, and at that time we were a heavier rock band. We switched to the drum machine by necessity, and it was difficult at first, but after a while it was what pulled the band together. Also, logistically it was easier to carry a drum machine around. It’s always a constant presence, and easy to play to. I like having the very consistent tempos. But now we’re doing both — the last few shows have been with Jamie playing along to the drum machine, and that’s exciting. ■