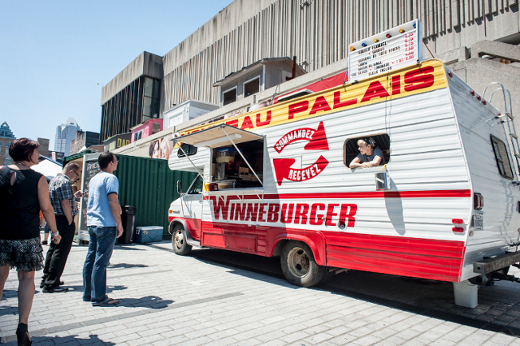 The City of Montreal is in the process of rather gingerly opening the door to street food vending. Mayor Applebaum recently announced that this summer, for the first time since 1947, the city would be allowing some street eats. It will run a very modest pilot project, with 10 food-vending sites scattered throughout the Ville Marie borough — i.e., downtown and Old Montreal.

Little more is known at this point. The exact locations and, more importantly, the rules governing food vending during the pilot program have yet to be disclosed. The pilot is to be the first step towards a citywide street food policy, to be formulated between now and 2015.

The road back to food vending on Montreal’s streets has been, and continues to be, a slow one. The idea has come up a number of times over the last few decades but, until recently, has never been taken too seriously. There have been two perennial excuses for continuing to disallow the practice: that it is unsanitary and that it constitutes unfair competition to brick-and-mortar restaurants, due to much lower overhead.

The idea came back to the fore a couple of years ago. A group of former staff members from Anthony Bourdain’s favourite restaurant, Au Pied de Cochon, bought an old Grumman food truck. They began slinging inventive tacos at private venues around town while agitating to be allowed to sell them in public spaces. They managed to get a considerable amount of media attention and, without a doubt, were instrumental in putting street food on city hall’s agenda.

The first real sign of openness from the city was when it allowed the Société des Arts Technologique (SAT) to set up an outdoor food market at Place de la Paix, a square on lower St-Laurent, for a few days in 2011. This served as a model for similar events that the city authorized last summer in Place Émilie-Gamelin and the Olympic Park. Though these events involved selling food outdoors, on city property, this was still not, strictly speaking, “street food.”

A major development came later last summer, when the city mandated its Permanent Commission for Urban Development and Housing to study the idea of cuisine de rue. Over the winter, the commission held public hearings and researched other cities’ experiences with street food vending. It examined, among others, Toronto’s ill-fated recent attempt to diversify its street food offering beyond “street meats” — i.e., hot dogs.

Toronto launched a well-intentioned pilot program called “À la Carte” in 2009, which was to bring affordable, healthy foods showcasing the city’s diversity of ethnic cuisines. Fourteen businesses were admitted into the program, but only two made it to the end of the program’s second year. All the others quit or went bankrupt.

À la Carte’s monumental failure has been ascribed to excessive costs imposed on vendors and inflexible and excessive regulation. On the cost front, participating vendors were forced to buy a standard food cart, selected by the city, for the hefty sum of $30,000, regardless of whether the equipment included with the cart was suitable for their particular cuisine. On top of that, they had to fork over up to $3,500 in licensing fees.

On the regulatory front, the city assigned the vendors very specific locations and was inflexible with respect to requests for changes. Vendors in locations that turned out to have low traffic or that had temporary issues, such as nearby construction work, had trouble obtaining permission to move.

An even bigger problem, according to several critics, was that city officials meddled with the vendors’ menus. Every single menu item had to be scrutinized and approved by a committee of public health zealots. Not only did this limit what vendors could sell, but it also made it difficult for them to subsequently adapt their menus in response to customer demand.

A consultant’s report on the program concluded that city bureaucrats had interfered with what should have been the vendors’ own business decisions. Rather than try to curate every aspect of the program, it was suggested, officials should have given vendors more latitude with respect to choice of equipment, location and menu.

While Toronto regulated its handful of food carts to death, Vancouver and Calgary also launched pilot street food programs. Both so far seem rather successful. In Vancouver, about 100 permits have been issued for vending on streets and in parks. In Calgary, around 40 food trucks have permission to operate in selected “Business Revitalization Zones” (BRZs).

Regulations in both cities are less heavy-handed than they were in Toronto, but not altogether absent. Vancouver has a competitive application process for vending permits. Qualifying applications, which must satisfy a set of safety and sanitation requirements, are evaluated by a group of judges in terms of nutritional value, the culinary merits of the proposed food and the strength of the vendor’s business plan. Vendors are free to design their vehicles as they see fit but must have the designs approved to ensure they integrate functionally and aesthetically with the assigned location.

In Calgary, applicants must also satisfy a number of guidelines, but the process does not seem to be as competitive — anyone fulfilling the city’s guidelines can obtain a permit. Interestingly, the city does not assign specific locations to particular food trucks. Rather, it has designated certain areas (within the aforementioned BRZs) where food trucks are allowed to operate. Trucks are allowed to stay at a given location for a maximum five hours at a time.

Both Vancouver and Calgary’s street food policies include measures to appease brick-and-mortar establishments. Vancouver does not allow vendors to be less than 60 metres away from a restaurant selling similar foods. In Calgary, that distance is only 25 metres, and the restriction does not apply outside the competing restaurant’s business hours.

Here in Quebec, we unfortunately have a proclivity for overregulation, particularly where all things related to food and drink are concerned. As we were all reminded recently, even the language and the size of text on a menu are subject to regulation. Hopefully, this will not apply to street food vending in Montreal. The commission that studied the issue is well aware of the Toronto program’s failure and, in its recently published report, has clearly recommended that the city not overburden vendors with rules and fees. Hopefully, decision makers will heed this advice and not try to curate every aspect of street food vending.

The city says it wants street food here to be healthy and to showcase Montreal’s gastronomic culture. At the same time, it strongly insists that street food vending will not unfairly compete with brick-and-mortar restaurants. Applications will thus only be taken from prospective vendors who have a fixed address where food production is already permitted. Basically, this means that only existing restaurants will participate. Expect the usual suspects — those who had kiosks at Place Émilie-Gamelin and the Olympic Park last summer — to snap up the few permits that will be available.

It doesn’t seem as though this pilot program will create a culinary revolution in Montreal this summer. ■