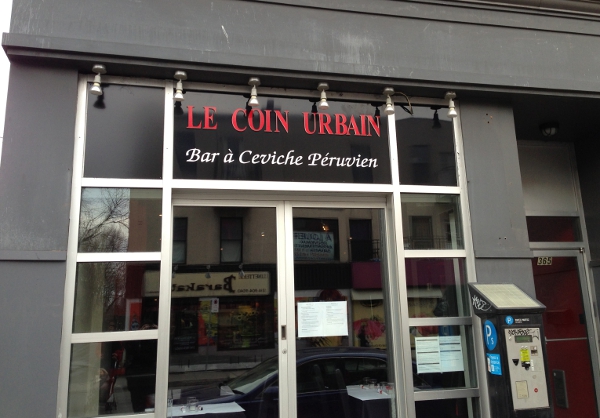 My Peruvian food experience consists of one meal in Verdun, one at a family-style joint in New York City’s suburbs and a few dinners cooked by my Peruvian babysitter when I was growing up (thanks for introducing me to tripe, Esther!). Which is to say that I’m eminently qualified to review this cuisine.

I can tell you some things about le Coin Urbain (365 Bernard W.), the new incarnation of a Peruvian restaurant that just moved from Villeray digs to the more foodie-friendly climes of Mile End. Besides a change of space, the menu has also been overhauled, moving from a traditional appetizer-main set-up to a menu more focused around smaller plates, the most substantial of which cost between $10–$17. The chef is a young guy who cooks in an RVCA cap, plays Fugees tunes and turns out very precise, carefully flavoured dishes.

We went the day before the official menu change, but got to sample five courses through a special $30 per person tasting menu. Some common threads run through through the food: Peruvian chili peppers, lime and choclo, a large-kerneled corn, reappear in many guises. A salty amuse-bouche of said kernels, this time toasted (cancha), was placed on our the table as soon as we arrived. It was followed by crispy tequenos (cheese sticks), which came with cassava, a rice ball filled with vegetables and a fresh cheese sauce that was much more delicate than it sounds. “All that is in this?” exclaimed the man at the next table upon hearing the ingredients. Indeed.

Our tequenos were followed by a mashed potato stuffed with squid, lime-y and subtly spicy with chili pepper. The classic ceviche, which came sprinkled with corn kernels and served over a butter lettuce leaf, was refreshing, but next time I’d try another ceviche option on the menu, like the tuna or sashimi-style fish.

The lomo saltado, a beef bavette marinated in a salty soy-sesame sauce and served with potatoes and tomatoes was excellent, as was the saltado de mariscos, a spicy, citrusy mixed seafood dish served over quinoa.

The $16 Sunday brunch menu offers a respite from the eggs Benedict circuit, with several Peruvian-inspired sandwiches that all come with a tamale, fresh fruit, potatoes and coffee/tea. I’ll be back to try some of those, and for another citrusy jolt of ceviche. ■