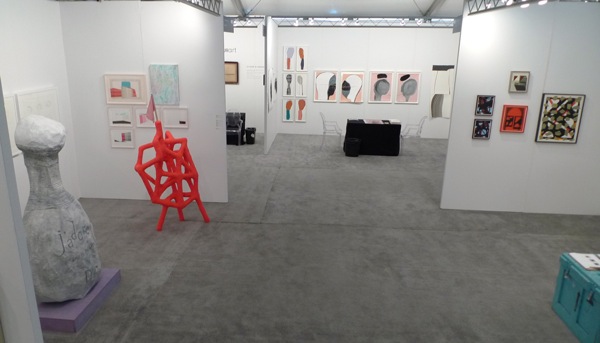 Inside the Foire Papier contemporary art fair. Photo by  ARHphoto.

This year, Foire Papier celebrates its sixth anniversary. As usual, the annual event brings together works on the humblest of media together for a free exhibit downtown, but this round the show has substantially broadened its horizons to better represent what’s happening in Canadian contemporary art today, with over 400 artists’ work crammed into the 15,000 foot display space in the Quartier des Spectacles.

“Every year it’s expanding, getting even more beautiful. Every year I’m moved by what I see, but this year is quite special. We’re reaching another level. Everyone knows what it is,” says the fair’s spokesperson, ARTV host and Radio-Canada personality Catherine Pogonat.

She explains that heading into this edition, there was a tremendous demand from galleries across the States and Canada to take part. Ultimately, she reveals, “They chose to stay in Canada, not to let the States come in through the festival, to stay Canadian. This year it’s from one ocean to another, they decided to let in galleries from Vancouver, Halifax, Toronto of course, but there are more galleries than ever before, 44 in total.”

These new participants from across the country join most of the big-name contemporary galleries around town, as well as a few staples from Toronto such as Paul Petro, who had taken part in past editions.

Kristen Weckworth is in town representing Toronto’s Narwhal gallery for the first time at Foire Papier. The gallery reps the Team Macho collective, whose poppy painted paper pieces took up a whole wall of the open cubicle allotted to the gallery.

Weckworth was enthusiastic about doing the event, saying, “It’s been so much fun, everyone here is so nice. It’s just been a pleasure. Everyone was so helpful that it was actually a relaxing process to put it together.”

In addition to offering the pop-up downtown gallery free all weekend, the fest is leading a suite of tours and workshops to get the public acquainted with the participating artists and galleries. While most are in French, Sunday afternoon there is an English-language presentation on the history of art on paper, including long traditions of engraving, printing and, of course, drawing. Many of participating galleries also have special events planned; check the event’s website for details.

The festival kicks off in earnest with a “Pow-Wow” at the SAT tonight, already being hyped as the party of the season, with DJs Annie Q, Why Alex, Why? and Charmant et Courtois. With so much packed into a single weekend, Foire Papier offers a broad cross-section of the most exciting trends in Canadian contemporary art today, with a little something for everyone. ■