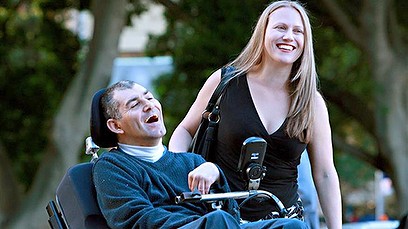 Catherine Scott’s documentary Scarlet Road, screening tonight as the season closer of Concordia’s Cinema Politica series, tells the story of Australian sex worker Rachel Wotton. Operating in New South Wales, an Australian state in which prostitution is legal, Wotton is able to do her work without harassment, and she specializes in a disabled clientele, providing comfort, companionship and relief to men who have no other opportunity for sexual intimacy.

With a charming smile, easy laugh and generally sunny outlook, Wotton is an ideal ambassador for the film’s argument in favour of sex work as a positive force for the disabled. The other people profiled in the doc are equally impressive, from the clients who speak openly about the needs that Wotton fulfills for them, to Wotton’s unusually open-minded boyfriend, to the mothers who hire Wotton to bring her special services to their disabled adult children.

Scott even films a couple of the encounters between Wotton and her clients, showing some (though not all) of the particular services she offers, a provocative cinematic choice sure to push a few buttons and get viewers intimately acquainted with their own comfort levels.

Like Quebec director Jean-Claude Lord’s Les criminelles (which also touches briefly on sex work with the disabled), Scarlet Road has no pretence of being an even-handed documentary; feminists who oppose legalizing sex work are mentioned, but only briefly in order to mock or dismiss them. Of course Scott has no obligation to give equal time to a counter-argument, but her portrayal of sex work as an entirely benign phenomenon, its exploitative and otherwise unpleasant aspects brushed aside, occasionally feels like a whitewashed portrait.

But the film’s agenda is hardly hidden: it seeks to normalize, and celebrate, two elements of society that a lot of people would probably prefer to keep hidden away. And the argument goes down a lot easier with a star as charismatic as Wotton (who’s coming all the way from Australia to attend the screening). You may come away feeling that much of the rest of the world is a few steps behind New South Wales. ■