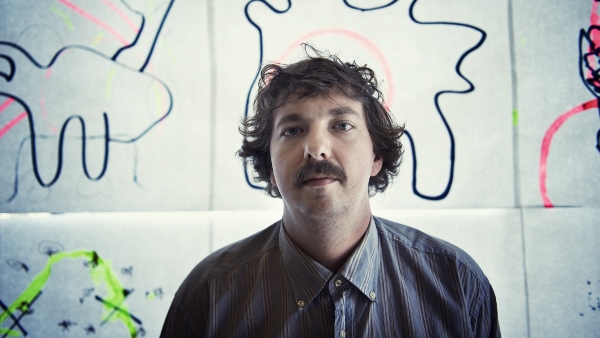 The first time I heard about Beaver Sheppard, it was in a restaurant review. There was a menu item at Dépanneur le Pick-Up called Beaver in a Robot Suit, and when the critic ordered it, a guy in a cardboard costume emerged from the kitchen, came to the table and did the robot dance.

That was Beaver, a special of the day for $2.

Aside from being a ubiquitous scenester and creative restaurateur (he co-founded Dinette Triple Crown in Little Italy last year and is on the verge of opening a new space nearby), Sheppard is a singer-songwriter. He performs solo, but is also half of two duos: Country, a synth-rock project with fellow Newfoundland native David Whitten, and Secretsecret Girl, a new house-music experiment with Pascal Oliver.

Ahead of his headlining solo show this weekend, I spoke to Sheppard for the first time ever, which is kinda crazy (’cause I’ve been doing this for a while).

Lorraine Carpenter: So what’s the status on your synth-pop project?
Beaver Sheppard: Country? I think that’s gonna be my bread and butter, but we’re kind of on hiatus right now cause David’s away. We recorded seven tracks with [names local record label], but they changed the way we sound  a lot. It’s almost become dancefloor. The songs are pretty guitar-driven, but they just cut the guitar from the mix and put all this other stuff on it. Kind of amazing. I don’t think we’re gonna release anything with [that label] at all. We’re not sure what we’re gonna do, but David comes back in July and we’re gonna play MEG.

LC:  How did you guys get together?
BS: We kind of formed because of the Pop Montreal lotto, where you workshop songwriting in one night. He was my girlfriend’s roommate at the time and I didn’t even know if he was any good or anything, I just asked him. And then boom! He’s got an amazing sense of the ’80s. He’s got a weirdness to him. I really liked what we wrote for that; it was just a crazy amount of writing.

Writing solo is the hardest. In a band I can talk about pro-prostitution or the end of the world in this really vague sense, just kind of get deep and crazy and not really have to explain myself. Having people comment on your every word all the time gets annoying. The level of craft [for the solo project] is a lot more tedious, even though I love it.

I saw Neil Young play solo once, and I saw Xiu Xiu play solo and that was it for me. That was how it was for a while, even though I’ve got a punk heart. Ten years ago, if you’d told me I’d be on stage playing solo all the time, I would’ve never believed it in a million years.

LC: You have a solo record in the works, right?
BS: I’m still writing a ton of lyrics to finish off the solo record that’s been sitting around for a couple of years — 16 or 17 songs. It’s all on four-track, but I’ve been trying to get into a studio to record it with someone. Maybe I should just release it on four-track. I’ve been so underground with it all for so long. I’ve had my ups and downs. I haven’t stopped, ever, I just haven’t been very good at promoting myself or getting great recordings, or even releasing the ridiculous amount of material that I’m sitting on. I don’t know what I’m waiting for. I’m not waiting for anything, I’m just gonna do it in my own time.

LC: You have a new project, right?
BS: Yeah, Secretsecret Girl. I wanted to do a lo-fi house, late-night party thing, so I just started doing it. Me and my friend Pascal Oliver holed up in a house in Lachine where he was house-sitting, like walking a dog. We just filled up six tapes on four-track in a weekend and then reworked the material. I didn’t think we were gonna do it live, but we played a birthday party and everyone really really liked it, even though I wasn’t doing anything. It’s all prerecorded, and I was just mumbling over it and he was playing some guitar parts. We thought, “This is legit. DJs play parties.” People tell me it sounds like John Maus and Zola Jesus. I like where it’s going.

LC: You play loft parties, you’re at that new restaurant show space Kathy & Kimy this weekend and you’ve also played halls like Ukrainian Federation. What’s your preference?
BS: The best solo shows I’ve ever done have been in legit venues. The more legit the place, the better the performance will be. But with Country or Secretsecret Girl, I prefer that to be as ghetto as possible, especially Secretsecret Girl. I only wanna play at 5 a.m. for, like, black gay people — that’s the best. People just going crazy. I just wanna keep it dark, keep it hidden, keep it hollow, keep it empty but full. That’s when the spirits are out, at 5 a.m. There’s magic in the world at that time; part of the world shuts down, and for the other part, every minute is vibrant and amazing and repulsive. Sex is at a premium.

I’d say the real essence of this city is after hours. Of course there’s tons of amazing things going on before 3 a.m., but after hours, people are just crazed. They’re all drugged up or whatnot — they’re just wild, right? They’re just insatiable and hyper-sensitive and crazy and sexed-out. I love it. I love that that scene keeps that shit alive, and the police are kind of okay with it. They’re almost like, “Let ’em go.” If we were in any other province, or most of the States, that would not happen. The cops don’t care that much, and it’s kind of amazing. It’s the golden ticket of Montreal. ■