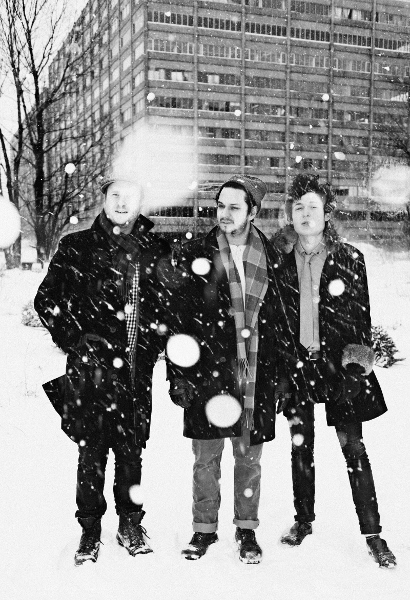 Remember when wolf bands were all the rage in this town? Well, unfortunately our lupine friends have all but gone extinct, except for animalistic electro party rockers We Are Wolves, who this week dropped their fourth album, the morbidly titled yet infectiously rhythmic La Mort Pop Club.

“For the last six months, I’ve been hearing that the band doesn’t exist anymore,” says frontman/bassist Alexander Ortiz. Granted, they replaced drummer Antonin Marquis with the stylish Pierre-Luc Bégin, and when a pitch for funding fell through, they had to finance the album themselves. But besides those hiccups, it’s been business as usual since the release of 2009’s Invisible Violence.

I recently sat down with the trio in a conference room deep within the heart of their label’s office on St-Joseph, where we chatted about their hidden philosophical sides, possibly writing a ballad and keeping the wolf flame alight.

Erik Leijon: Is la Mort Pop Club… a club?
Vincent Lévesque: There’s that idea, but it’s not a proper club. You don’t need a card.
Pierre-Luc Bégin: Everyone’s admitted.
Alexander Ortiz: When you hear that word, you’re intrigued by it, you wonder what we’re referencing. But when we mean “death” and “popular” it’s more like whatever you believe in, death is a part of who we are. It’s death, not in that it’s trendy, but that it’s inevitable for everyone.
VL: I also think it’s human nature that whenever you hear about a club, your first instinct is to want to be a part of it.

EL: Is it an album about death?
VL: It’s rock music, so there’s always that element. I do feel the album is especially dark this time.
AO: Maybe. For sure there’s reference to death, but not in the typical rock ‘n’ roll talk of death.
VL: Right, it’s not about living fast and dying young.
AO: This album has been in our heads for a while. In the last year I’ve had this fascination with [German philosopher] Martin Heidegger. The lyrics and the construction of the album in a way is about the perception of being there, the question of your being.

EL: Is your music usually rooted in philosophy?
AO: It’s always been there. We’ve been inspired by [French writer] Georges Bataille and the song “Sudden Little Death” has a Bataille “La Petite Mort” reference.
VL: I think before we didn’t have that many lyrics, so it was a bit more unclear, but it’s always been part of the process. We work with the idea that you don’t necessarily have to use a lot of words to have a message with your art. We’re not didactic though.
PLB: The music can camouflage the intent sometimes. On La Mort Pop Club, the music is more harmonized with the words.
AO: On an older song, like “Magique,” it sounds like slogans, but it’s meant to be pretty deep and there’s openness in the interpretation.

EL: There’s one song on the record, “Voices,” that struck me as a ballad.
AO: Almost. It’s like when I listen to Spacemen 3, for me they’re ballads. Not typical ones, like “Sweet Child O’ Mine” or Extreme.
VL: It’s like your favourite band writing a ballad; it’s a ballad but it’s still the band you love, there’s still something off about it. It’s not supposed to make girls cry; it’s more about being open in the moment.
AO: It has a dark feel to it, like a Nick Cave murder ballad. That kind of vibe. People who know us might hear it and think it’s a weird song for us.
VL: For us it’s always been there, and we just wait for our moment to let it out. Spacemen 3 are a huge influence on us. For some reason people who know We Are Wolves don’t see that.
AO: There’s a song on our first record (“Namai-Taila-Cambodge (Go-Tabla-Go)”) that’s psychedelic krautrock with a tabla sound from a drum machine. It’s circular and there’s nothing going on – for me that’s a We Are Wolves ballad. People know us for our animal, primitive party thing, the electronic energy and going crazy…
VL: …Which is still there. We’re heavier than ever, but at the same time we know there are other vibes that are a part of us.

EL: How does it feel to perhaps be the last Montreal wolf band?
AO: There are a few ‘We Are’ bands now, I think. It’s band names, man — every four years there’s a new trend, from crystals to bears.
PLB: Were you the first wolf band?
VL: Yes, in Montreal.
AO: Maybe Montreal.
PLB: Before Wolf Parade?
VL: They even said it once in an interview with the Village Voice.
AO: I don’t know if they said that.
VL: They said they found our band and were aware of it. Who cares anyway? It was one moment where you choose your band name, then you’re stuck with it forever.
AO: I think it was [AIDS Wolf’s] Chloe Lum who had the idea, or at least somebody said it, that we should do a Wolf show on a boat, or a train. AIDS Wolf, Wolf Parade and us on a boat, a booze cruise of wolf rock. ■