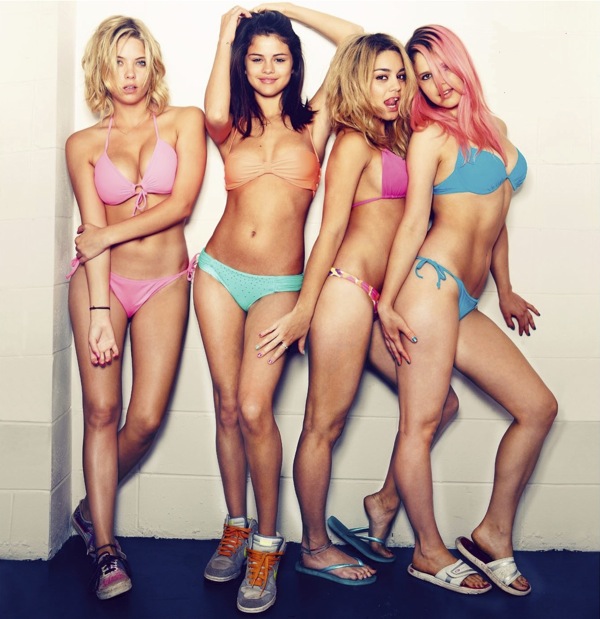 As talked-about as the movie has been, it was hard to know what to expect going into Spring Breakers. You’ve got Harmony Korine, whose Gummo still holds up but who spent many of the years since in a drug-induced, Meryl Streep-purse-rummaging haze with an underwhelming follow-up (Mr. Lonely). Then there’s James Franco, about whom just about everything that can be said has been, and more. And of course, the central gimmick of casting Disney Channel child starlets Selena Gomez and Vanessa Hudgens as “good girls gone bad” reeks of crass exploitation.

So you could be forgiven for approaching the movie with a fair amount of skepticism. I did, but I’m here to tell you that Spring Breakers is a must-see — despite, or because of, being every bit as trashy as it appears.

Gomez, Hudgens, Ashley Benson and directorial bride Rachel Korine are four college friends who head to a Florida beach town for a week of debauchery. There, they meet Alien (Franco), a rapper and small-time gangster, and become part of his entourage. In a clever bit of casting on which a cynic might detect the fingerprints of her handlers, Gomez’s character is actually a good Christian girl who’s uncomfortable with her friends’ badass side (the other three, unbeknownst to her, rob a diner to fund the trip) and actually goes back home before things get out of control. Which, thanks to Alien’s challenge to the local crime lord (Gucci Mane), they quickly do.

Hudgens, on the other hand, sheds all decency for some incredibly nasty scenes. I can’t say that I’m familiar with her previous work, but seeing her onscreen in a former-child-star context is bound to be either disturbingly arousing or just plain traumatizing. (Actually, it’s already both those things without knowing her former oeuvre). As for Franco, he elevates the movie to instant cult-classic status with a performance that’s equal parts absurd, creepy and unexpectedly touching.

Spring Breakers is difficult to compare to any other film; the closest would be the Bad Lieutenant rethink by Korine’s mentor Werner Herzog. Both films strike the perfect balance between art and trash. And both contain amazing, unforgettable scenes that I could describe, but that you’d be better off just seeing for yourself. Leave your political correctness at home, though; a good 20-30% of the movie is bikini-clad or topless girls on the beach, bouncing in slow motion while dudes pour beer on them, sometimes augmented with bizarre video effects for good measure. It’s a crazed, experimental and often poetic version of a Girls Gone Wild video: morally beyond degenerate, sensory-overwhelming and strangely fascinating — in other words, the perfect film for our time. ■