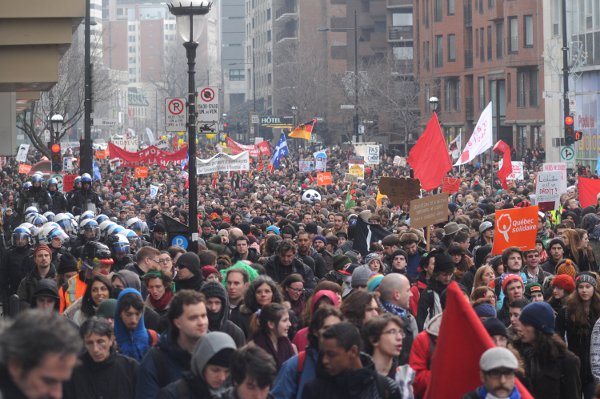 So, the Quebec education summit is over and the only group that’s really happy with the results is the Parti Québécois. By proposing a three-per-cent indexation of tuition fees — way too little for supporters of a tuition hike and too much for those who believe in free education — Premier Pauline Marois has tried to take some of the wind out of the sails of the student protest movement.

The summit also proposed the creation of five working groups (PDF) to look more long-term into issues such as university governance, funding and student aid.

When I use the word “summit,” I mean the PQ government, because the only propositions coming out of the conference were the ones that Marois and higher education minister Pierre Duchesne had tucked into their back pockets well before the two-day show on Feb. 25–26. In fact, they announced the tuition indexation on the eve of the first night, probably in an attempt to stifle participation in a mass student protest planned for the next afternoon.

Still, somewhere between 5,000–10,000 students took to the streets to protest the “perpetual tuition hike” until the demonstration was broken up with flash-bang grenades, tear gas and police on horses charging the crowd after protesters threw snowballs at officers. Once more, most mainstream media decried the “violence” but failed miserably to discern which side had engaged in activities that could actually hurt someone.

One issue that was not discussed at the summit on the future of universities is how technology can be used to both lower the costs of providing education and increase its accessibility. Instead, the government and university administrators continue to advance an agenda based on brick-and-mortar schools whose main technological advances consist of white boards and PowerPoint presentations.

Over the last two years, major efforts have been made to launch Massive Open Online Courses, known as MOOCs, by institutions such as Princeton University, Stanford University, University of Pennsylvania and the University of Michigan. Stanford launched three of these courses in fall 2011, each with an enrolment of 100,000.

Although most of the MOOCs currently in operation are non-credit courses, there’s no reason why our public institutions can’t adapt much of their for-credit curriculum to delivery via software such as Skype. Okay, MOOCs might not replace Autopsy 101, but do you really need to sit in a lecture hall to understand Introduction to Macroeconomic Theory?

MOOCs would allow universities to significantly reduce costs and improve accessibility. Here are some of the advantages that immediately leap to mind:

• Reduced operating costs by reducing demand for classrooms. No need to rent buildings or build fancy new ones; no need to heat them, clean them or secure them.

• Increased scheduling flexibility. Professors would no longer need to worry about travel time between classes. In fact, they could easily share classes, passing the baton to a colleague with a particular expertise with a mere click of the mouse. And students wouldn’t have to worry about schedule conflicts, since lectures would be recorded and could be reviewed later.

• Increased accessibility. Single parents who couldn’t afford to leave their children alone while pursuing studies, for example, could do those studies at home, pausing the lecture when they need to feed the kids or change a diaper.

• Increased class sizes. There would be no physical limitation to how many students a class could handle, yet each student would feel like she was sitting in the front row. If you double the class size, for example, you cut the cost per student of teaching in half (though you’d need to add teaching assistants to help with grading, etc.). Students could ask questions without interrupting the class, as the teacher monitors queries and answers those she deems relevant to the lecture.

• Increased geographic accessibility. People in remote areas would have access to schooling anywhere there’s an Internet connection. They wouldn’t need to leave their community or spend extra money on lodging.

Adapting MOOCs to deliver higher education in Quebec is an idea that merits our attention as we seek ways to ensure we have the resources to meet the challenges of the future. And as we expand the university population while reducing costs, maybe we’ll see free education as an idea whose time has also come. ■