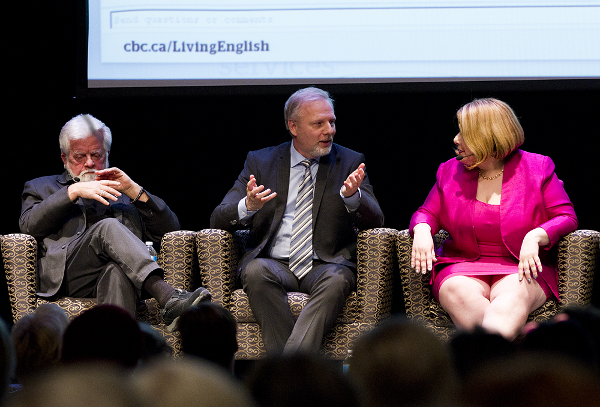 I swear that being an anglo in this town wasn’t always fraught with such difficulties. Sure, you’d get the occasional snide “en français SVP,” and you’d have to squint a bit to read the smaller print on signs, but I’d usually order my café in French and no one seemed genuinely perturbed by my imperfect accent and poor conjugation skills.

Lately, though, our new-ish PQ government has been coming on strong with the anglo baiting — more golden oldies than new salvos — but that’s to be expected. My gripe these days is with my own anglo ilk, who seem to be playing right into Péquistes’ hands by further retreating into anglo-dom in response to Pastagate, Bill 14, STM-related rudeness and the botched Lachine hospital switcheroo (am I forgetting anything?).

The biggest offender so far has been the local branch of our national public broadcaster, which in an unwittingly divisive way has been pushing the Two Solitudes pride harder than my IGA grocer pimps week-old sushi. Last week it held a symposium called Living English, where it essentially allowed the angriest and most curmudgeonly of the anglo scene to ambush glad-handing anglo minister Jean-François Lisée.

It was a perfect one-timer: Lisée just had to sit there and absorb the barbs, and he came out looking quite sane compared to his angryphone detractors. His party’s policies, of course, remain as irrationally vile as ever.

Living English also bothered me somewhat as a scribe, since the CBC essentially manufactured its own controversy, but that’s another debate entirely.

So here’s the deal: outside of the political arena, everyone in this town gets along fairly well. Most of us can hold our own in either language. Most of us follow the Habs, to varying degrees. We all hate potholes, and we’re all affected by corruption. The only time I feel like a disenfranchised anglo is when I’m being reminded by pundits that I supposedly am one. ■