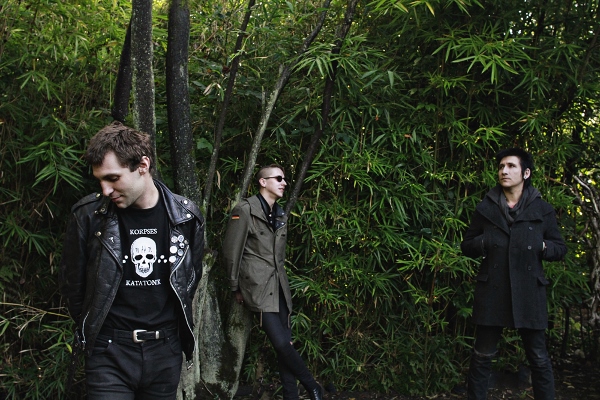 Neofolk is a complicated genre made up of complicated people doing complicated things. Started by post-industrial groups like Death in June and Current 93, neofolk loves ruminating in the same way that dance music loves gyrating. But is the music itself complicated? Not so much.

I’m not saying that Brooklyn band Cult of Youth doesn’t have a rare gift for creating beautifully layered, sepulchral post-punk folk that makes you want to indulge your depression by staring out the window for so long that all the plants in your apartment wilt and die from neglect.

All I’m saying is that post-industrial music is cerebral as fuck, and that there’s more to it than meets the ear.

When first seeing the fascist imagery pervasive throughout much of neofolk, you probably think: racism. But, from the post-industrial mindset, it’s more likely to be interpreted as an interest in iconography, detached from political conditioning. As far as I’m concerned, that’s basically a less retarded, intellectually justified version of Sid Vicious running around London with a swastika t-shirt for shits ‘n’ gigs back in ’78. I asked Cult of Youth frontman Sean Ragon about being accused of fascism and got the impression that he’d been asked a few too many times before.

Gregory Pike: Someone called you a metapolitical fascist band and pointed out that you have a Star of Chaos tattoo, which he claimed was associated with the European New Right. How would you respond?
Sean Ragon: First of all, I don’t even know what that means — what exactly is a “metapolitical fascist”? Second of all, the person who wrote that is a lackluster academic, an educated fool with way too many books and way too little life experience. It was a stick and poke tattoo that I got in a punk house I used to live in over 10 years ago. The Chaos Cross is a punk symbol that has never had anything to do with fascism. In fact, it’s a symbol predominantly used by far-left bands. If you look at the artwork from every record released on either Profane Existence or Havoc in the ’90s, I guarantee that you could find that symbol on at least half of them.

People like the author of that piece want fascism to exist in this world more than anything because it gives them a socially acceptable target for the hatred that they feel inside. The thought process is this: everyone hates Nazis, so if we kick the shit out of one, then there will be no repercussions for our own violent activities. Without Nazis to fight, they would have to turn that hatred on themselves, or even worse, look into the mirror. Therefore, they do whatever they can to create boogeymen around themselves because it’s easier to judge others than it is to take an honest and introspective look at oneself.

Gregory Pike: So I guess the question is, what kind of relationship exists between industrial music and fascism?
Sean Ragon: It’s a long and complex history, and one that requires a bit more than a short paragraph in an interview to properly understand. The basic rundown is this: Genesis P-Orridge started Throbbing Gristle with the idea of creating music without a political perspective — something that would oppose rock and roll by presenting controversial subject matter without an opinion. The purpose was an expression of unbiased information. This was accompanied by loud sounds and bright lights, which, hopefully, would shock people into an open-minded gnosis state where they could think freely about the subject matter, stripped of all their conditioning. It was a social experiment in deprogramming. Unfortunately, people defined by the reptilian mindset of left and right politics tried to pin them down and started putting value judgements on something that was supposed to transcend that. Add about 30 years and generations of misunderstanding and you have the complex mess that we have today.

Gregory Pike: Being free of those value judgments sounds similar to you describing your own material as liberation music. How do you define liberation music?
Sean Ragon: I would define it as something that hopefully causes people to question and confront their deepest, most heartfelt social conditioning—something that inspires people to engage the world more openly and free from fear. It promotes love over hate, and freedom over oppression.

Gregory Pike: With that in mind, what are your plans for the future?
Sean Ragon: Hopefully being able to make music without having to answer questions about whether we are or are not fascists. Everybody needs to grow up. ■