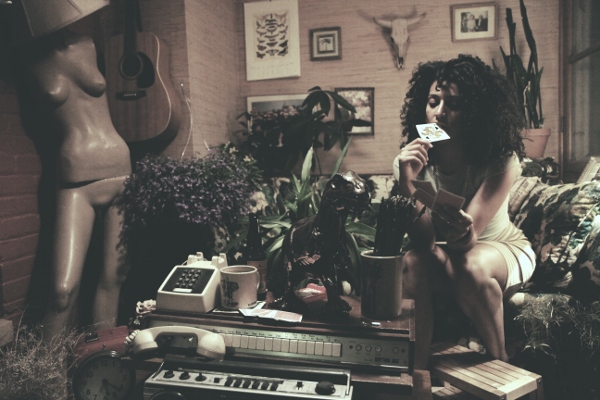 A K U A. Photo by Stacy Lee

At the outset of our conversation, admittedly I have to ask the MTL-based solo synth-soul minimalist the same thing a lot of people want to know: is it “Ah-cue-ah”? “A-quoi”? How do you say it?

“Story of my life,” says Akua Carson, 27, seemingly flattered that people have been talking about her to begin with. If you’ve been mispronouncing it, it’s because there’s reason to discuss  A K U A.

“I was always a closet singer,” says Carson, who grew up in London, ON, kid sister to her big brother Kofi, who attended high school with cats like Canadian mic phenom Shad.

“I didn’t even go into that territory until I got to university. I just had friends pull my arm to start singing back-up, and I used to kinda get shitfaced just to get on stage! It was this gradual progression of being involved in other people’s music.

“And then, I’m just an ambitious person, so secretly, right away, I was like, ‘Whoa, what if I tried to sing myself?’ But it took me fuckin’ two years to finally do anything [solo] publically.”

Early encouragement to take it beyond shower blues and bottled bravado, while studying international development at McGill, came with a membership pass to mid-2000s Montreal funk/dub mainstays Kweku & the Movement. Suddenly she found herself in what she had always believed had to be someone else’s shoes.

“I think my biggest obstacle [was being] hung up on this idea of people either having ‘it’ or not, and I definitely thought I was in the have-not category. I just believed in the myth that you’re just sort of a musician, or you work,” Carson recalls.

“And I really didn’t feel like I was good enough, or that I was of that school. I didn’t study it. I didn’t know much about music production or even songwriting. That was a mental barrier.

“[Getting over] that was something that Kweku in particular taught me,” she continues. “When he approached me, I just saw him as this hot-shot guy that’s onstage. Then I developed a personal relationship with him and realized that he’s a self-taught musician who just took risks. That was the biggest lesson I learned. There’s no prerequisite. You can only learn by doing.”

And so she did. Her next transition seemed to her even more unlikely.

“I think it’s ironic because the reason, basically, that I am a solo act is because I was too scared to ask anyone to perform with me! When I first, first started gigging, I was just playing with an acoustic guitar at a café and didn’t tell anybody about it. Then I started sneaking a loop pedal in.”

Carson essentially spent a year and change building her confidence in front of small crowds, inconspicuously beginning to appear at bigger showcases for wider audiences, barely telling a soul besides her brother (with whom she collaborated on her upcoming “Gravity” video, out April 9).

“I guess I’m a proud person, so I didn’t like that idea of really setting everyone up, like, ‘Come to my show! This is gonna be awesome!’ I just didn’t believe it would be awesome,” she says, humble to a fault, albeit entertaining in her easy, comic demeanour.

“When I finally presented stuff out there at these random showcases, you’d have a stranger come up and be like, ‘I loved that! Who are you? What was that?’

“But when strangers come up and show you love and talk to you about it, then you’re like, oh, okay, this exists outside of me and my harebrained idea of trying to do this thing,” she says. “Whereas you know your friends are gonna come and go, ‘We fuckin’ loved it!’ even if they don’t, right? I’ve done that! But you know what I mean — your friends are gonna show love no matter what, as they should.

“The thing about it is that if it truly sucked, I would have been able to walk away and no one would have ever had to know about it. It could have been like, that year that I was trying to do music and was totally kidding myself. Does that make sense?”

An EP due in early June has been two years in the making. Carson also spent a stint doing back-ups for on-again/off-again local outfit She’s Got a Habit, the dividends from which paid out in the form of a continued creative partnership with Berkeley-jazz-schooled bandmates Martin Rodriguez and Andy Bauer (who now happens to be drummer to indie pop sensation Twin Shadow).

“Everything in terms of getting my shit out there has been pretty serendipitous,” says Carson, her light demeanour somewhat in contrast to a musical sensibility at once upbeat yet haunted by ghosts between the notes.

Appearing Thursday to open for hyper-political Detroit rapper Invincible!, A K U A has only just begun to explore the depths of where her music might take her — in fact, she sported a mermaid tail prosthetic and swam on the coast of Florida to create the vid for “Gravity.”

“I’m not that strong a swimmer,” she says with a Martin Short-like flair. “I wanted to do it on my friend’s lake in the Laurentians. Kofi wasn’t havin’ it.

“I still feel like I’m testing the waters, and I still feel like it’s crazy to present yourself alone on stage, and that’s why I look up to someone like Invincible!, or Narcy, because they’re just fearless with their mission and their message. That’s like, boom! That’s powerful! I would love to have that effect as a performer, and I think that’s the next step for me — to be more vocal about issues that are important to me. I feel like I keep everything really light right now, and I’m sorta easing into things.” ■