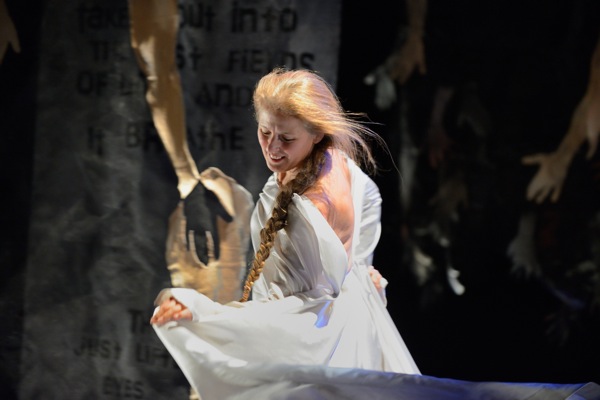 Margie Gillis in The Light Between. Photo by Michael Slobodian.

“The piece starts in an energy of curiosity, which is what I think is one of the elements of getting unstuck, and it just flies from there,” explains celebrated dancer and choreographer Margie Gillis, just days before the première of The Light Between.

The trio she created, with longtime collaborators Holly Bright, Marc Daigle and Paola Styron, is an evolution and a confluence of past collaborations during Gillis’s career, which spans over four decades during which which she has created more than 150 works.

One of those influential creative influences for Gillis was Manitoban visual artist Randal Newman. After Gillis saw his work for the first time over 25 years ago, she knew she had to collaborate with him; hence the haunting visual environment for her new piece, which focuses on the themes of transformation.

“The set is these hanging arms, faces and legs, much like moving through the veil, [where] just part of the person is visible. Are they coming? Are they going? Where is this area of shift between this world and the energy between it?” asks Gillis.

Although The Light Between was created by mature artists, and will be performed by Daigle, Styron and Gillis herself, the captivating performer with the signature mane says her oeuvre has a wide appeal. “I often find that the work I do that I think is just going to touch younger people, touches older people. The stuff breaks down barriers. The work has a human basis and really does transcend its form through the ages. But the people creating it are older, and at any age in the creative process, there is something that is strong, and something you lack.”

Gillis, who reveals she is “just shy of 60,” explains how her work has transformed over the years. “When I was in my twenties, my work was very raw, but there was not enough finesse, and then I went through an age of power and developing finesse. Now at this age, the energy behind the skin, but that runs through the bone, becomes very, very apparent, clear and precise. These are all elements that are present at any age, but the degree to which they are present is fascinating. So here I am in the next set of adventures.”