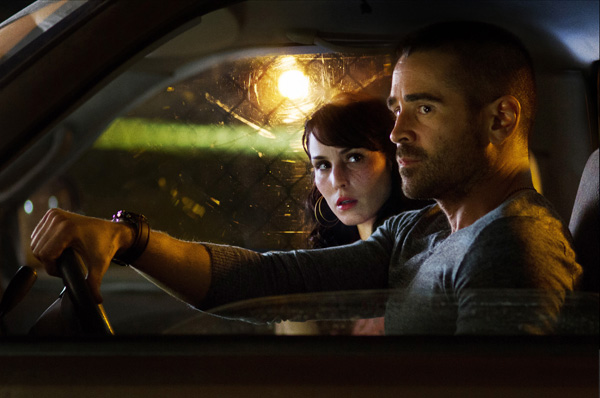 Noomi Rapace and Colin Farrell in Dead Man Down

You know things are getting dire when you approach pretty much any action movie that isn’t based on a comic book, toy, action figure, fast food meal or soft drink with cautious anticipation. A movie like Dead Man Down is an increasingly rare occurrence on multiplex screens: an action thriller that’s ostensibly pitched to adults, without leaning too hard on the nostalgia factor or attempting to placate the widest demographic possible.

Be that as it may, taking yourself seriously doesn’t always translate to quality filmmaking. Dead Man Down proves to be a muddled, if not entirely uninteresting, attempt at fusing lowbrow and highbrow cinematic pursuits.

Victor (Colin Farrell at his most sullen and unengaging) works as muscle for murderous gangster Alphonse (Terrence Howard). His position in the gang is a cover that he’s designed to avenge the death of his wife and daughter, who were killed by Howard’s goons as they tried to muscle them out of their apartment building. Hell-bent on revenge, Victor is secretly taking out the members of the gang one by one when he’s spotted, in the throes of strangling a man, by the woman in the adjacent apartment building, Béatrice (Noomi Rapace).

Hideously scarred (by movie standards, anyway; it looks more like a worrisome rash at worst) in a car crash, Béatrice blackmails Victor into killing the man who got away scot-free from the drunk-driving incident that causes neighbourhood children to chuck rocks at her and call her “monster.” They begrudgingly work together at ridding themselves of their respective demons and, who knows, maybe they fall in love in the process? (Spoiler alert: ya think?)

Directed by Niels Arden Oplev, of the original Swedish version of The Girl With the Dragon Tattoo, Dead Man Down does a lot to separate itself from its ilk (this is definitely the only time Isabelle Huppert, who plays Béatrice’s mother, will ever be associated with a WWE Studios project, I can tell you that much). It’s clear that Oplev was brought in to do exactly what he did for his previous film: elevate what’s basically airport-paperback material. Oplev tries his damnedest to bring that trademark bleak Nordic oppression to this twisty, New York-set neo-noir, but he winds up laying it on a little thick. The pulpy premise buckles under the weight of all the brooding, a sentiment that works at odds with a movie that has Colin Farrell swinging from a hanging corpse and firing an Uzi in broad daylight.

All that brooding also means a film that strives to be psychologically richer than you’d expect. It’s here that Dead Man Down delivers (albeit mostly in fits and spurts). The twist-heavy plot makes for character interactions that run beyond the damsel-in-distress, lone-hero and psychotic-heavy trifecta that usually permeates this type of film. It’s too bad, then, that they’ve left it up to a near-vacant Farrell (an actor who’s infinitely more interesting when he gets to crack wise and run his mouth, but is too often relegated to glaring and grunting in a reasonable approximation of the strong, silent type) and an overreaching Rapace (who can never quite sell her outsider status, given that her supposedly life-changing scars are so faint) to carry so much of the film.

I found The Girl with the Dragon Tattoo portentous and heavy for something that came from a book moms read at the beach; this is just about the same thing with significantly more explosions. Until the ridiculous, Peckinpah-esque final shootout, Dead Man Down feels like it’s adhering to a strict fake-it-until-you-make-it policy. It’s not enough to pout and dress everyone in black, though; we’ve got to feel it too. ■