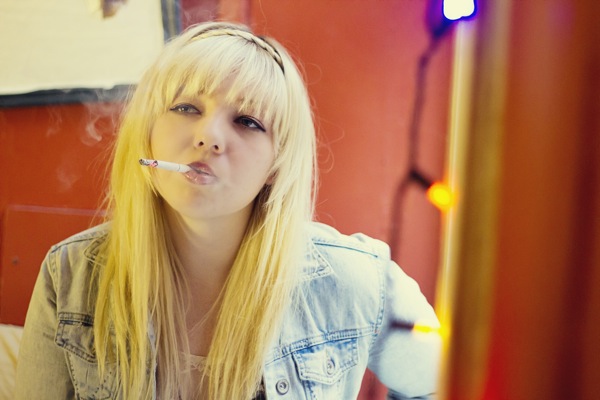 I first saw Julie Mannell read an excerpt from her novel in the works, tentatively titled Little Girls, at an event organized by writer Klara du Plessis and the recently opened Resonance Café. By the time Mannell finished, I had cried three times.

23-year-old Mannell is the founder of the McGill Creative Writing Society, an editor for the Scrivener Creative Review, a regular contributor to the Huffington Post and The Barnstormer, and she has received recognition for her work in feminist political activism. She’s reading this week as part of Teen Poetry, a fundraiser for Scrivener, where she and other Montreal writers share diary entries, chat sessions and break-up letters from their own oh-so sticky and tricky formative years.

I sat down to seek enlightenment from Julie Mannell about writing, small-town feminism, “wearing” other women and Roseanne Barr.

What spurred the start of the McGill Creative Writing Society?

There was an ongoing issue I found at McGill, and not just in creative writing, that there was a real inequity of opportunity for people coming from a lower-class background. I realized very quickly that even though I might have been a talented writer, I’d never learned how to use a semicolon. I hadn’t been exposed to the same things, so there was a different type of hurdle I had to overcome.

In terms of creative writing, McGill offered a few publications and maybe only one class a year of around 15 people. It didn’t seem fair that if you hadn’t developed to that point in your writing, then you wouldn’t get into that class and there’d be no place for you to develop.

When I got elected to DESA (McGill University’s Department of English Student Association), I suggested the idea to run workshops. There are workshops run by a collective of students, as well as separate workshops run by writers.

It seems like you write from experience, is that true?

Where did you grow up?

Fonthill, Ontario, near Welland. I went to high school in Welland, and then there’s Fenwick, which is the country and where you’d have all the bush parties and the Southern Ontario gothic scenery.

I lived in a liminal space between two worlds: one I would compare to Flint, Michigan. It’s a closed-down factory town and very much of that culture. And the other I would compare to rural West Virginia or the deep South, [especially] in the summer. It has that feel of running barefoot through the grass to your neighbour’s house.

I have a love/hate relationship with those places. I really hated growing up there because even though it’s a really incredible place in a lot of ways and there are a lot of characters, it’s also kind of insular. With that kind of insularity, places don’t really change or grow necessarily. I’ve seen it grow, but I also remember growing up in a culture that was extraordinarily homophobic and sexist. That’s part of what is influencing the writing of my novel, which has two female protagonists.

What have been your experiences with this?

I went back to my hometown for Christmas and I was at a party and some guys took out a screenshot of something I had written. The guys were laughing at how I had used big words. I had just had an article come out with the Huffington Post, been signed to an agent, and had my own apartment and life in Montreal.

For someone to then take out a picture of my writing and mock me for being smart was really angering. They were angry that I had broken what they thought was a boundary. We should never accept sexism for what it is. We should always say something. I was working on an article at the time about small-town feminism. If you’re educated or see the world in a different way, you have a responsibility to bring that to your small community, even if it just ends up being people yelling at you at a party or forcibly ostracizing you.

Talking about your novel, what inspired the creation of your two female protagonists?

Part of it is inspired by where I grew up and women I knew growing up. What interested me, was the way women “wear each other.” The way women put on another woman’s makeup or when you look in a magazine, see pictures of women, and try to make yourself into a woman. Everyone knows that ballsy girl in middle school who would be the first to smoke, have sex with some crazy older guy, and have the best stories. That’s Tiffany, my narrator’s best friend.

I noticed you re-tweeted Roseanne Barr recently. I love Roseanne. That sitcom was way ahead of its time. Let’s talk about Roseanne.

Roseanne is one of my biggest heroes in the world. I just watched all the Roseanne episodes in one month. She was an incredible writer who was badgered in the media. I wrote this essay about the way female writers are critiqued. I line up the criticism of female writers from Virginia Woolf to Lena Dunham.

The way people have been talking about Lena Dunham’s writing has really disgusted me on a visceral level. I lined it up with what people said about Virginia Woolf and it’s all the same thing. It seems to me that the problem people have with female writers is not their writing, but that they’re transgressing some [perceived] sphere. It’s like “get back to where you belong.” When Virginia Woolf was writing, people told her that she should be writing about female issues, but that she couldn’t because she wasn’t a mother. Lena Dunham has the pressure of representing a show and a few characters, which is a lot harder than people think, but now those characters are expected to represent all women because so few women are writing. It sets up female writers so that they’re always going to fail. ■