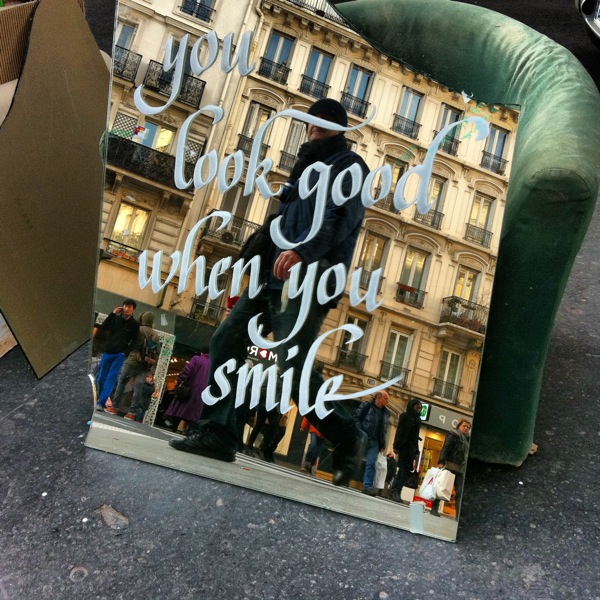 Take a few steps away from the city’s manicured main streets, and Montreal’s alleyways tell their own story of finding beauty in unexpected places — namely, the trash.

Lying against a dingy orange mattress, a white plank of wood destined for a landfill has been emblazoned with thick, Gothic calligraphy that reads “laid back.” Somewhere else in the city, a stool that has been cast aside bears the playful instruction “you can sit here, the paint’s dry.” And on a snow bank near a building’s back exit, the message “la font des neiges” has been carved out in letters so crisp they seem forged by a giant news press.

For two years now, local street art group Garbage Beautyhas been the hand playfully sculpting the city’s trash into messages that belie the supposed ugliness of refuse material with their humour and sensitivity.

After discovering a shared passion for calligraphy through a magazine that published the works of master calligrapher Luca Barcellona, co-founders Vincent Box and Romain Boz tried their own hand at calligraphy by studying under Montrealer Marco Chioini, the president of the Montreal Calligraphers’ Society.

When they took their paintbrushes to the streets, they discovered that the city’s garbage heaps were blank canvases.

“Living in a big city, walking through the streets, we’re surrounded by advertisements, posters, shop signs, but we’re so used to seeing it that it doesn’t call out to us,” says Box. “But when you see something on garbage, it’ll capture the attention of 95 per cent of people because that’s like a final frontier, the last place you would expect to see something written.”

“We’re transforming visual pollution into a surprise,” Box explains over the phone from France, where he spread the Garbage Beauty mandate through several projects, including a series of artistic nudes with calligraphy body paint, and painting an old scooter destined for a gallery in Garbage Beauty’s thick signature script. 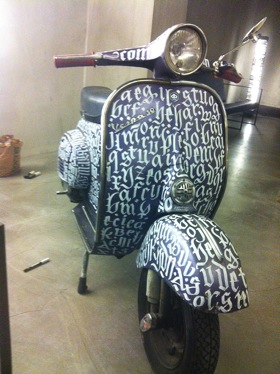 The group has since expanded to include members Olivier Rielland Nadeau and Étienne Savaria. According to Box, because garbage is on the curb one day and gone from sight the next, Garbage Beauty’s artistic practice is loose, fleeting, and liberating for both artist and viewer.

“It’s very opportunistic, like most street art. Depending on our ideas, the physical location, and what we come up with, the inspiration is different, and what we produce varies,” Box says.

“There’s a human element to our work. It’s like calligraphy — it’s not perfect, like type on a computer screen,” he reveals. “There are sometimes spelling errors that we’ll make, or the joke isn’t that great, or it doesn’t really fit on the object, but that reflects life. It’s human.”

The attraction to hand-crafted, imperfect, yet skilfully produced art objects is a trend that Box claims the public is yearning for in an age when digital might mean flawless, but can leave the audience cold. Calligraphy, though, is an art whose stunning finished product requires years of dedicated practice.

“When we first started the group and discovered calligraphy, I was bored of perfect, computer-style type. And when the public first really discovered our art, they wrote to us asking for lessons,” he says. “We referred them to Marco Chioini and he ended up taking a few students, but calligraphers are like sensei. They only take students who respect the rules of the art form they’re learning — you can’t skip steps.”

Box and his fellow Garbage Beauty members will be testing those skills against five other groups at this Wednesday’s Beaux Dégats graffiti competition, the eighth in an ongoing series of events hosted by local street art and graffiti gallery Fresh Paint.

This time, the competition will be held at the Foufounes Électriques bar, while Fresh Paint’s new space is being prepared. But the energy and friendly but fierce competition, particularly against recently de-throned champions Iron Axe, promises to transfer to anywhere the artists take the event.

“We hope that we’ll add diversity to the visual aspect of the competition, and we’ll see how we adapt the Garbage Beauty aesthetic and practice to the night,” says Box.

And although he can’t divulge where the new Fresh Paint will be located, Box reveals that Garbage Beauty already has plans to participate in the opening.

This summer, Garbage Beauty’s calligraphy will be writ even larger as they join non-profit organization MURAL in producing the first Montreal international public art festival, produced with LNDMRK, presenting the work of up to 20 visual artists along St-Laurent Boulevard.

“It’ll be a challenge for us, in terms of what we’re working with. We’re still wondering how our style will evolve from using garbage to participating in this project, but we’re excited.”