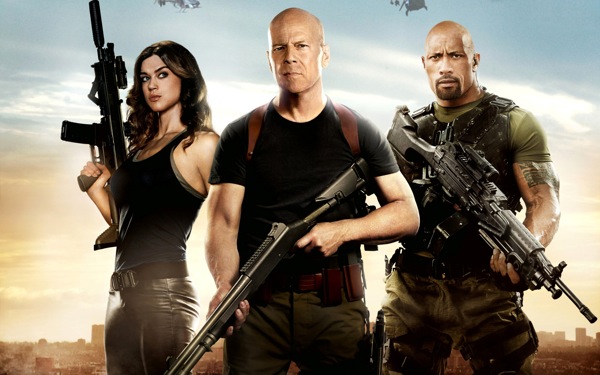 Courtesy of director Jon M. Chu (Step Up 3D), there are fewer toy-chest antics and a hell of a lot more ninjas in this leaner, meaner sequel to the original 2009 stinker G.I. Joe: The Rise of Cobra. Sadly, not even the exponential increase of throwing stars, nor the seemingly reluctant appearance of a Hollywood A-lister, allow G.I. Joe: Retaliation to ascend to heights of popcorn greatness.

Once upon a time, the G.I. Joe team wore slick, black, sci-fi battle-suits, made a lot of dorky jokes and counted Marlon Wayans among their sizable ranks. Now the Joes dress like actual army dudes and number only a handful of troops, still managing to keep up the lame one-liners despite the blessed absence of Wayans. Clearly all is not rosy in The Pit. With the Joe team cut down to four members and the villainous Cobra Commander (Luke Bracey) on the loose and in control of the White House, the pint-sized band-of-brothers (and a couple of sisters) must rely on their wits, and Bruce Willis’s outlandish and handily available weapon stash, to save the known universe. Or, you know, the Earth.

The plot of G.I. Joe: Retaliation is as tired and clunky as any of its ilk, but don’t hold that against it. What’s a film adaptation of a popular ’80s toy brand (or a James Bond film, for that matter) without a madman threatening to destroy the planet with an orbiting satellite of doom? The great news is that the film succeeds in its reimagining of the direction of the franchise and only really poops the bed in its kneecapped vision of scale: the team is smaller, there are fewer large, exotic weapons, and the “epic” battles feel diminutive relative to those of its cinematic predecessor. Someone crippled this bad boy to save a buck, and it shows.

But don’t fret, fans, as all is not lost. The B-plot of G.I. Joe: Retaliation is what you’re paying your good money to see, and it is glorious. Lifted straight from an issue of the ’80s Marvel comic (the inspiration behind Chu’s vision), it’s Snake Eyes (Ray Park) against Storm Shadow (Byung-hun Lee), brother versus brother with battling ninjas on both sides, karate flips, cliffside combat, and more genuine dramatic heft than anything else in the film. This is the good stuff. Try not to let the expensive and poorly executed 3D conversion pull you out of the karate action.

The Rock rocks in his role as new team leader Roadblock, radiating a boatload of charisma and ably carrying a good chunk of the film on his broad shoulders. And thank goodness, because the actors on the side of the angels are given little to do in the way of actually “acting,” stuck portraying lifeless cardboard cutouts. And let’s not even talk about Bruce Willis. He’s in the film for, maybe, all the time it takes to watch his scenes in the trailer, and doesn’t hide the fact that he’s only there to collect a few bucks. Or maybe being bored in explosive action scenes is the new black.

Those not indoctrinated into the multifaceted world of the toy brand, or who might have (wisely) skipped The Rise of Cobra, may find themselves lost juggling the plot threads carried over into G.I. Joe: Retaliation, but don’t worry, it doesn’t really matter. Everything goes boom in the end. ■