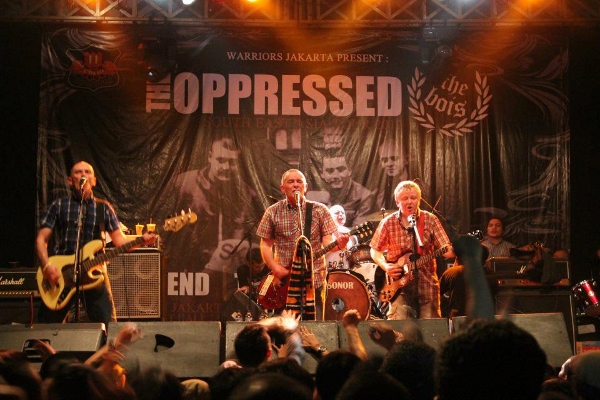 When it gets down to it, there are really only two types of skinheads — those who need a boot in the ass and those who don’t.

It’s usually subtle differences that set them apart: the colour of their bootlaces, how much they love Skrewdriver and whether they’re wearing collared, button-up shirts or T-shirts featuring the Stormfront logo. So it’s unfortunate that, to the untrained eye, they all look like a bunch of racists.

But rest assured, there are plenty of good skinheads who walk among us. And Cardiff, Wales oi! legends the Oppressed are, for all intents and purposes, the good guys.

The band, formed in 1981 by Roddy Moreno, subscribes to SHARP (Skinheads Against Racial Prejudice), a worldwide movement against white power skins that comes with its own lexicon. They also support antifa groups and Red & Anarchist Skinheads, or RASH. The three-piece band is filled out by Paul Cobley on bass and Tony Kizmus on drums, with singer-guitarist Moreno as the sole remaining original member.

Cult MTL caught up with Moreno via email ahead of the Oppressed’s show tomorrow night as part of the two-day St. Patrick’s weekend oi! fest, which begins tonight at Katacombes.

Tracey Lindeman: How did your one-off Montreal show come about?
Roddy Moreno: Our friends, the Prowlers, asked us to play their St Patrick’s festival. It’ll just be one gig, though. The U.S. is a nightmare trying to get visas for when you have prison records.

TL: When the Oppressed, and oi! in general, started up, things were different on the political scene and in interracial relations. Not to say politics don’t still suck, or that people aren’t racist anymore, but do you still feel you’re fighting those battles?
RM: The only difference between then and now is the boneheads [colloquial for neo-Nazi] now hide in the greyzone and claim non-politics, but they’re still out there and the battle goes on.

TL: Do you still get scum coming to your shows and/or trying to antagonize you?
RM: No, the scum never come to our shows. Our crowd is mostly people with an anti-fascist attitude.

TL: What attracted you to making political music in the first place?
RM: When we began, we had no interest in “politics,” but then right-wing politics infiltrated the scene and we wanted to show where we stood. It was that simple.

TL: Can you tell me a little bit about your involvement with SHARP?
RM: My only involvement was promoting the idea by using the band’s renown to spread the word. It means to me what it says on the label — nothing more, nothing less. I am a skinhead who hates the cowardice of racism.

TL: When you started your label (Oi! Records), you said no reds or racists. But now you say you support RASH. What changed?
RM: When I started the label, I was naïve, politically, and the “neither red nor racist” sounded cool at the time. Since then, the band has played outside the U.K. and we have met many RASH people who share our hatred of Nazi scum and have became good friends, so we stand beside them in the battle against fascist scum.

TL: What kind of music do you listen to at home?
RM: I only listen to old school reggae and soul at home. The only punk/oi! bands I have time for all have antifa credentials.

TL: Do you have some kind of vetting process?
RM: Well if a band wants to sit on the fence, that’s their choice, but I respect bands who make it clear where they stand. There’s no vetting process, but you choose your friends carefully.

TL: I read that seeing a group of skins at a football (soccer) match when you were 12 in 1969 was the main reason you decided to become one. What about them impressed you? What kind of music did you listen up until that point?
RM: They looked like an army and they just blew me away — a hooligan army was very impressive to a 12-year-old kid. I wasn’t really into music before then, but picked up on skinhead reggae and soul at youth clubs, and it’s [always] been my first love.

TL: Montreal’s Major League Soccer team, the Montreal Impact, are playing both days this weekend. Are you going to go to either of the games?
RM: The lads from the Prowlers will be taking us to the game on Sunday the 17th. I don’t follow the MLS, but will be cheering for the Montreal Impact with the rest of the lads. ■