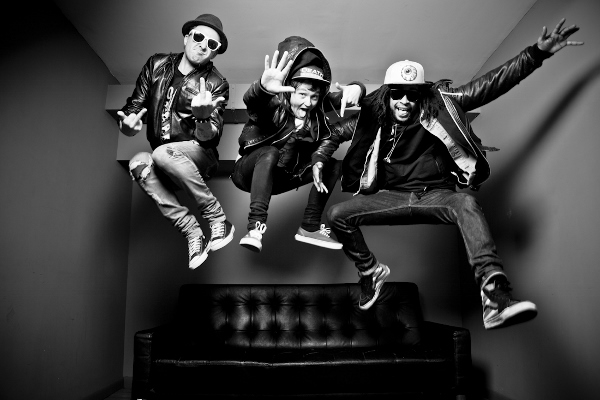 Despite some hard times since forming in 2005 — from forging VISAs as a desperate way to remain in the U.S to the death of founding member Beau Velasco — the Death Set’s herky-jerky electro-rock is saturated with posi-vibes. As frontman Johnny Siera explains, “I think without being positive, then it’d probably have been over by now.”

Originally from the Gold Coast of Australia, the band has bounced around, living for a while in Baltimore, and finally ending up in Brooklyn. They’ve garnered a following wherever they’ve gone, winning crowds over by compelling them to thrash-dance with their convulsive punk riffs, bouncy electro hooks and tongue-in-cheek lyrics.

Also, the vocals are high-pitched, like a 33 rpm record playing at 45 rpm. And I know what you’re thinking. But it’s not annoying. For real. The motherfucking Death Set is motherfucking catchy.

I caught up with frontman Johnny Siera while they were minutes from the border, set to play four Canadian dates. Though they’ve just finished up at the sunburnt kamikaze binge-orgy that is SXSW, troopers as always, they’re plugging right along with their tour without a moment’s rest.

Gregory Pike: I saw you guys a few years ago in Sackville, N.B., back in my college days.

GP: I remember there was constant noise. Like, in the breaks between songs, there’d be hip hop or electronic fillers that were just as loud as when you played your instruments. Do you guys always play without breaks of silence?

JS: Yeah, we try to. We try to break it up with different styles of music, too, rather than just straight balls-to-the-wall punk rock.

GP: I love how you and a couple of other Brooklyn bands, like Ninjasonik and Cerebral Ballzy, do that special slap-slap-slap-pound-up-down-snap handshake. How’d that start?

JS: Ninjasonik started it. And we decided to make that song about it because everyone in our crew started doing it.

GP: There seem to be a lot of bands in your crew. Like that supergroup you’re a part of, Newmore Switchblades, which includes Matt & Kim, Todd P, Team Robespierre, Ninjasonik, Cerebral Ballzy, plus others.

JS: We like to collaborate with as many people as possible. And in as many different styles as possible. We try to play with whoever, and as much as possible.

GP: A lot of people — yourselves included — introduce the band as, “The motherfucking Death Set.” Where does that come from?

JS: It’s just a lyric from one of our earlier songs. It wasn’t really a conscious decision. It just has a nice hook about it, so it stuck.

GP: Are you guys looking forward to coming back to Montreal?

JS: Yeah, totally. The last time we were there was Osheaga, and it was fucking awesome. Just a really good atmosphere. And a really fun show. But I think the first time we played in Montreal was at the Divan Orange. And that was cool, too, because that was the first time the people from our label, Ninja Tune, ever saw us live. So it’ll be cool to go back to where it started. ■