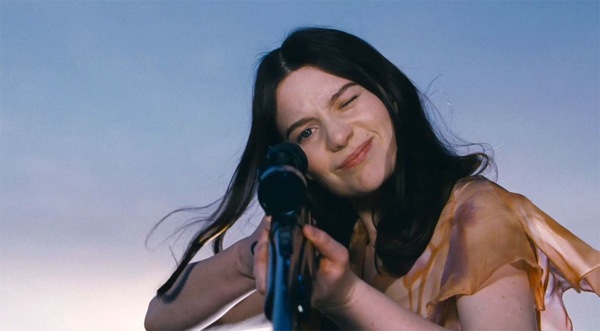 Everything in Stoker happens very, very slowly. I’m not saying it’s boring; it’s far too visually lush and composed, its mystery too compelling, not to grip the viewer intensely throughout. But the story is ultimately about a metamorphosis, and it dishes out its secrets at an evolutionary pace.

The psychological thriller marks the English-language debut for South Korean director Park Chan-wook (Oldboy, Sympathy for Lady Vengeance), feted for his films’ mix of sumptuous beauty, graphic brutality and hairpin plot turns. While Stoker doesn’t eschew gore entirely, there’s nowhere near the violence or shock value of the Vengeance Trilogy. Instead, it is a gothic fairytale, family mystery and splashy serial killer horror flick, all packed into a terse 99 minutes.

After 18-year-old India Stoker (Mia Wasikowska) loses her father when he dies in a car crash, his funeral sets the stage for a new domestic arrangement in the family’s sprawling 18th-century country house. Wasikowska mourns deeply, while her heavily self-medicated mother Evelyn (Nicole Kidman) seems relieved, even celebratory. A sinister Uncle Charlie (Matthew Goode) — who India’s never heard of before — arrives for the funeral, flirts with his brother’s widow, then stays on at the house.

This Hamlet-y setup quickly veers in another direction entirely. While India is suspicious about Charlie’s motives and sketchy past, the two Stoker women begin to compete for his attentions, while a quiet violence plays out in the story’s background.

To say much more about the plot would risk spoilers, and many of the film’s pleasures lie in anticipating how and when, exactly, Park’s going to break its slow, steady menace with one of his trademark flashes of sudden and surprising brutality.

Stoker is, simply put, a gorgeous film, with bold visual flourishes, saturated colour and layers of symbolic and referential allusions that offset the cast’s mostly restrained performances. As India, Wasikowska barely moves, while her character quietly draws violence toward her like moths to a flame.

The film’s setting was deliberately scrubbed of geographical references and sprinkled with anachronistic details, like India’s signature ’50s saddle shoes, and its bracing stillness gives it an oneiric quality. Park develops a rich iconography of religious images, long nature shots and a motif of birds and hunting, and he uses these in associative edits to relate psychological insights about the characters, making the film even more dream-like.

Park seems to have made few concessions in realizing his vision for an American audience, and he seems poised to join the slim cadre of Asian directors (Ang Lee, John Woo) who successfully cross over with this dark tale of coming into one’s own form of adulthood. ■