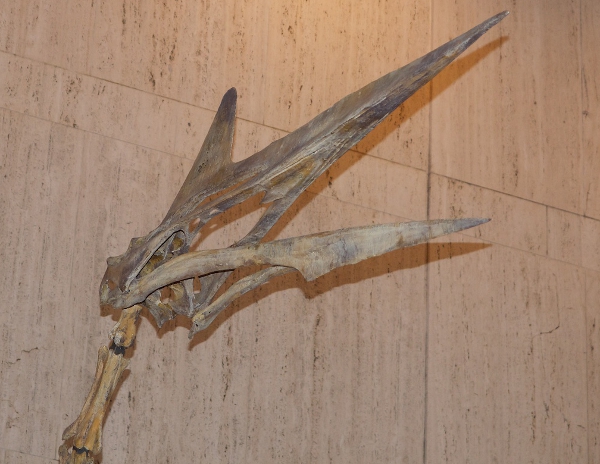 Let’s seriously put this thing on a coin, photo via Flickr

You know when you’re trying to sleep in the middle of the night but you notice something weird out of the corner of your eye, and you can’t stop thinking about how it might be a lit cigarette, or maybe someone’s videotaping you while you toss and turn, or maybe it’s a tiny glow-in-the-dark dinosaur that escaped from your jeans pocket? And then you finally get up because you won’t sleep otherwise, and what do you know, it really is a tiny, glowing dinosaur. So, what happens next? A) Your brain explodes or B) You wonder, “Is this where all the money saved from killing the penny went?”

Let’s go with Option B, because otherwise you wouldn’t be reading this. So, the Canadian Mint — in the same week it buried the penny — announced a new quarter featuring Quetzalcoatlus, a massive, flying Prehistoric reptile, or as the Mint puts it, “Lord of the skies: Quetzalcoatlus — North America’s largest pterosaur.” Hey, it’s the flying bird-reptile of your nightmares, and it could be in your pocket for the low, low price of $29.95. You’re never sleeping again!

After being booted from caucus, the esteemed senator Patrick Brazeau, a man with impeccable taste in hair care, has been charged with assault and sexual assault. As one person pointed out on the venerable Book of Faces, “Sénateur Patrick Brazeau = notre propre Chris Brown à nous.”

Quote of the week goes to Angelo Cecere, a guy who knows a thing or two about language: “What kind of qualifications do translators for the RCMP have if they don’t even know how to say ‘fuck’ in Italian?” Cecere, at one time a translator for the RCMP, apparently tried to undermine the cops’ case in the mafia-targeting Project Colisée.

Oh, hey, the Charbonneau Commission. Remember that? Well, it’s still happening, and the guy who took the stand yesterday, construction magnate Giuseppe Borsellino, aka Joe, also proved eminently quotable. To wit: “If I said bateau, I said bateau. Does it mean it’s a bateau? I could have said anything.” A great day for interrogators everywhere.

STOP THE PRESSES: A company in Vermont has reportedly purchased maple syrup out of the back of a (tanker) truck at a substantially lower cost than market price… That is all. ■