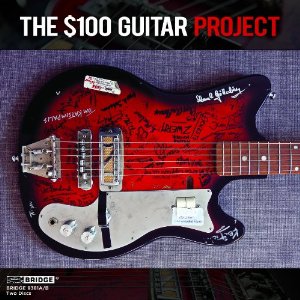 It’s easy to pick up a decent six-stringer for a song. I once scored a Univox Les Paul copy for $80 from a couple of East End stoners whose fretboard fantasies faded fast from fuzzy focus. A glance at the front cover of The $100 Guitar Project suggests that Nick Didkovsky and Chuck O’Meara were not so fortunate; bought online, their no-name axe suffers from decades of abuse and was held together by hockey tape.

Limitations being the taproot of creativity, I cracked open the double-CD set anxious to hear what Didkovsky and about five dozen of his pals could wring out of such a sad specimen, each given a week to record a short track before sliding it on over to the next slinger. Visions of top musicians saddled with warped truss rods, freaky fret buzz and crackling tone knobs fell flat, however, revealing works that would likely have not differed had the artists cut the shipping costs and strummed their own gits.

What is left is a state of the art survey of electric guitar styles, jammed with more tasty licks than a lollipop shop. Approaches range from floating iceberg solos to molten full-band rockers, from metal to meta, with and (mostly) without vocals. Durations run from a blink-and-miss-it eight seconds (Didkovsky) to over six minutes (Fred Frith).

Among the many avant-leaning highlights were Han-earl Park’s ability to squeeze in 10 movements of hyperactive volume-pedal-controlled scratchings into 1:07, Nels Cline’s apocalyptic, stompbox-dominated “Seared Beard” and Rhys Chatham’s “The Out of Tune Guitar ($100 Guitar Version),” a ringing swarm of detuned overdubs. John Shiurba’s “Down the Drain” actually sounds like the guitar is being forced through a sewer grate to meet its final fate.

Alt-rock fans can revel in the CCR-inspired tremolo blues of Del Ray’s “Leadbelly’s Jalopy,” or the wasted Lydia-Lunch-like no-wave of Blancah’s “ReD.” O’Meara’s instrumental “House of the Rising Sun” was indistinguishable from the surplus of versions already out there, but almost all of the 69 tracks are worthwhile. And if you don’t like one, the next is just ‘round the bend.

Royalties donated to CARE provides yet another reason to tap into this package, which is as expansive as the guitar was inexpensive.

If you left your heart in the heyday of unreasonably tall quiffs, overlong overcoats, emotive crooning, tinny guitars and pulse-quickening drums, Cleveland’s the Pleasure Leftists have the cure for what’s ailing you.

This bangin’ remixed A-Trak track from Fool’s Gold‘s Loosies comp gets a video that does it justice. I’d love to know what city that dep (/corner store/deli) is in. Is he drinking a Guru?