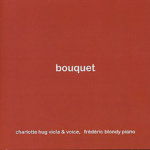 Each member of this improvising duo has extended the possibilities of their respective instruments.

French pianist Frédéric Blondy studied mathematics and physics before turning full-time to piano, training in both jazz and classical idioms at the Bordeaux National Conservatory. He’s a member of Hubbub, who alongside AMM are leading exponents of texture-based improvisation.  Like saxophonist John Butcher, who has a PhD in physics, Blondy’s experimental approach to his instrument has him playing as much inside and outside the sound box as on the keys, and he is not averse to extending and refining the possibilities through the use of objects to strike the various surfaces.

Violist and vocalist Charlotte Hug was born, and still resides, in Zurich, where she has perfected the “soft bow technique.” The hairs on the bow are adjusted to be loose enough so that all four strings can be played simultaneously. This allows up to eight notes to be sounded together, as two different pitches can result from each string, above and below where bow meets string. She uses her voice only sparsely on this recording, but her whoops and quivers add yet another layer to the mix.

Crossing these two results in a palette so rich and varied that overdubbing or electronic manipulation is suspected, but this recording was performed live, and with no electronic effects.  Each song is named after a rose cultivar, appropriately arranged under the title Bouquet. The 12 tracks thus present a dozen roses, and like their floral counterparts, these sonic blooms burst with vibrant colours and heady fragrances. Varying in length from under three to over 10 minutes, they recombine all of the duo’s influences into fresh cuts.

“Cato’s Pink Cluster” has the violin and piano chasing each other with rapid runs, the classical feel of the introduction giving way to a jazzier coda. Here, Blondy reminds one of Marilyn Crispell, as he shifts from gentle melodies to Cecil Taylor-like hammering of single notes.

“Sombreuil” and “Boule de Neige” are thorny electro-acoustic soundscapes, with Blondy flailing over all piano surfaces. “Rosa Moyesii” is minimalist (mirroring its single-flowered namesake), with Hug moaning almost imperceptibly along with the drones.

A tour through this highly cultivated garden is strongly recommended.

Alex Bleeker and the Freaks, “Don’t Look Down”

Alex Bleeker is the bassist for New Jersey indie rockers Real Estate, and the Freaks include some of his bandmates from that primary project and other friends. The jangly collective will release their sophomore LP, How Far Away, on May 28 via Woodsist. Here’s a taste.

Choosing between the gorgeous David Fincher-directed Justin Timberlake video and this ugly Odd Future mess was easier than you’d think. Witness wrestling with no rules and ridiculous costumes, cheered on by most of the OFWGKTA crew (Earl Sweatshirt is the ref). Tyler, the Creator’s album Wolf comes out on April 2.