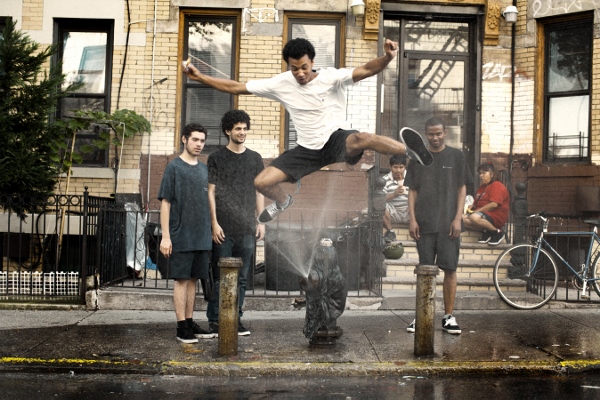 Back in 2011, an 18-year-old Upper West Side kid named Wiki, part of a crew known as Ratking, dropped an EP called 1993. The seven tracks, a near-22-minute interview with filmmaker Christine Choy among them, were a nod to the ’90s, with the precocious Wiki (who’s drawn comparisons to a young Eminem), dropping relentless bars linking complex rhyme patterns over producer Sporting Life’s straightforward boom-bap beats. A guy who came of age well past New York’s prime had crafted a timeless rap record. The collective caught the eye of the blogosphere last March, when they dropped a video for Wikispeaks.

Late last year, Ratking, also comprised of rapper Hak and producer Ramon, returned with a remade version of the same EP, now titled Wiki93. The New York classicism that coloured their first effort morphed into something more experimental and at times more aggressive. On Monday night, they’ll be at Il Motore. I spoke to Wiki and Sporting Life about New York rap, the ’90s and the cyclical nature of popular culture beforehand.

Lucas Wisenthal: Yesterday, everyone was talking about the 10th anniversary of Get Rich or Die Tryin’. Wiki, I imagine you were about nine when that record came out.
Wiki: Yeah, that was one of my first rap albums. When I was listening to Get Rich or Die Tryin’, that was when I was just getting into hip hop, and that was what was out and popular. I remember just listening to that shit at my friend’s crib, trying to make sure our parents didn’t hear and shit, because it was mad violent. But that’s such a dope album.

Sporting Life: It was one of those times where all the hype meets the quality of the work that was put into it. That’s what you’re supposed to do when you get money with music. It was so well done.

LW: There’s a lot of hype around some so-called New York revival, with A$AP Rocky, Roc Marciano, Action Bronson and so forth. Why do you think that this has come about now, and where would you situate yourselves, if anywhere, within this movement?
SL: Whether it’s a combination of the media and then rappers and that talking out the side of their neck, people want it to be a New York revival, but I don’t really feel like it’s some New York revival. It’s not even about one specific place. [There’s] gonna be a revival of anywhere or anybody on the planet who has dope ideas and a way to see that thing through. That’s the revival, not some New York revival.

SL: Musically, I don’t think it’s any type of new thing that’s really happening with everybody who’s talking about a New York revival. I don’t really see some type of artistic reinvention and revival that’s getting people hyped in the streets. I think it’s more just more talk and image.

LW: The 1993 EP was straightforward hip hop, but the Ratking version from late last year seems more experimental. Why did you change directions with the second release?
W: At first, it came from trying to figure out sample clearance and stuff. That was the first catalyst, but at the same time, after that, we got really into it and got into the idea of doing another version of all this stuff. We busted it out in a week or something.

LW: What would you say are the biggest differences between the two versions of those songs?
SL: The difference between the first and second versions shows the natural progression of the ideas we had becoming less of an idea of a thing and more the actual thing. Because you can say you experiment all you want to, but if it’s just talk, it’s just talk. But I feel like the second version was actually exploring some of the ideas we had talked about.

LW: There’s a lot of talk about ’90s revivalism. Whether that’s a real thing or not, why do you think that sound is suddenly relevant again today?
SL: I don’t know if you believe in the 20-year rule — every 20 years, what was popular in the last 20 years will become popular again. But I feel like it’s mostly that. That’s what culture is trending. It’s not just rap. I saw some fashion ads, and these girls were dressed in long DKNY dresses and shit. That’s some shit that was popping in the ’90s. So I feel like, culturally, things are trending back that way naturally. Rap is just a part of that.

W: If you take just one thing from that era, it’s gonna just be repetitive. If I’m looking in the past and I just take ’90s hip hop, that’s gonna get repetitive. But if I take ’90s hip hop and then fuckin’ jungle and then rave-type shit — all these different things — and mold those together, then I can make something new. ■