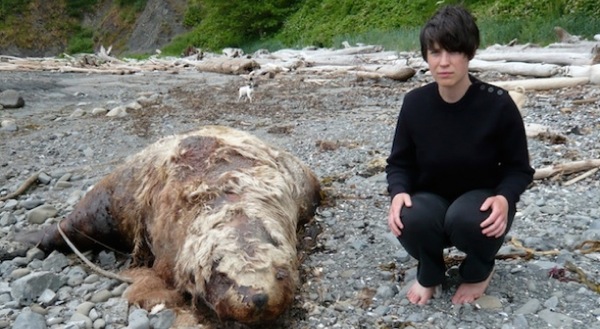 “I guess I’ve been beating around the bush for the last twelve years or so,” explains Geneviève Castrée. “I was basically trying to tell the story in Susceptible over and over again, but in weird, camouflaged, metaphorical ways.”

The prolific West Coast artist, writer and musician has tackled her subject matter numerous ways, including through graphic novels, visual arts and music, first as Woelv and more recently in loop-driven project Ô Paon. But the story she kept coming back to was her own.

Susceptible follows Goglu, a young girl who Castrée says “is definitely me,” through a troubled adolescence to the moment she is poised to leave her mother’s home. Her father is emotionally and geographically distant, a biker living in BC’s gulf islands, and her single mother Amère is stuck in a relationship with Amèr, the creepy boyfriend she refuses to leave. Throughout the book, Goglu is often forced to be the grown-up on behalf of the adults around her.

Goglu daydreams her way through childhood in rural Quebec, embraces punk and struggles with eating disorders as a teen, before coming to adulthood on her own terms as she moves away her mother at 17. The book closes with this realization: “I am eighteen. I have all my teeth. I can do whatever I want.”

For Castrée, this has meant single-mindedly throwing herself into her creative work. “I didn’t pursue any schooling after graduating from high school because I felt so impatient about making my own things,” she says. “I am still always in awe of university students. I find them to be so patient, so dedicated, so focused.”

While a lot of Castrée’s past work has flirted with autobiography, weaving threads from her own life into the crisp but childlike lines in her art, in Susceptible the whole story is Goglu’s coming of age. 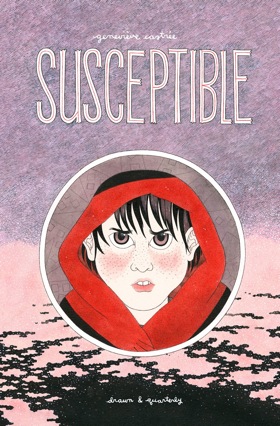 “I had been wary of making autobiographical comics, because not all of them are good and also because I didn’t want to create the illusion that people knew me,” she says. “But something I find myself repeating lately is that autobiography is nearly impossible: as soon as you put it on the page it, has been compromised, and once its been processed by the brain of another person, it can be distorted to the point of being unrecognizable.

“It dawned on me that I needed to exorcise some of my ghosts in order to move on. Maybe the story I kept going back to was the best story I had to tell. Doing it ‘for real’ felt like a rite of passage into adulthood.” ■