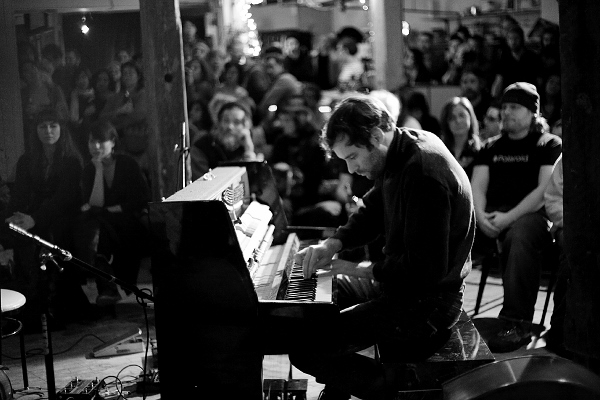 Stefan Christoff is a well-known community activist, writer, photographer and pianist. He’s involved with Howl Arts, a collective of cultural workers and activists bridging social justice and the arts.

This week, Howl Arts launches the first of a series of three recordings under the rubric of the St-Laurent Piano Project — the next installment will be a duo with Sam Shalabi on oud. I met with Christoff at a downtown café to discuss the connections between music and politics.

Lawrence Joseph: In your early years, your family lived in Ontario, Alberta and British Columbia. After travelling around so much of the country growing up, why did you choose to settle in Montreal?

Stefan Christoff: Montreal is a special place; its cultural and political life is unique in North America. Quebec history, the relationship between social justice movements and the arts, has always interested me.

LJ:  Your latest release is called Temps Libre. What does the title refer to?

SC: Jazz music in its origins was questioning traditional modes of time, such as length of time — for example, extending a piece to the whole side of a record. I first started listening to long pieces of music by Coltrane. Jazz also questions timing in a technical sense, creative improvisation using free time, not necessarily a fixed meter.

So I was thinking a lot about the relationship between time and jazz as a liberation music, given that jazz originated in the African American experience, a community that was involved in liberation struggles. I do think there is a relationship between jazz and the collective experience of the African American community, and this has been written about in various ways. But for me, jazz is free music, expressing a sense of freedom because of the struggle for freedom that was happening in real life. It was reflective of the dreams of that community.

Today we have very much drifted away from those origins of jazz as liberation music. We have seen the commodification of jazz, corporate sponsorship of the jazz festival, and it being seen commonly as dinner music.

Temps Libre is in French because we are in Quebec, and it was recorded at the end of summer during the student strike; we originally wanted to link the recording to the strike. I was out five days a week on protests, and most people around the project were too. What we experienced during that period was free time, or temps libre. In the moments where you’re acting upon dreams of freedom or fighting against an injustice, your usual understandings of time and the parameters of how we are controlled and how we control ourselves in this capitalist society break down. It does not matter if you are on the streets for six hours, and it’s beautiful. I was thinking about how we perceive time, and I was trying to play some music that expressed how I was feeling during those months. So Temps Libre is about those moments where you feel free. You just let go, and join a movement.

LJ:  Is there something inherent in the music that makes a connection to politics or activism, or is it just the packaging around it that transmits the message?

SC:  You can’t take music out of its context. When you do that, it’s being dishonest to the music you’re listening to or playing. Everything exists in a socio-political context; everything is political. When you are recording music, it exists in a context in your life. Temps Libre was recorded in Quebec during the student strike, and I was meditating on the moment we were experiencing in relation to jazz history.

LJ: Who else performs on the record?

SC: Brahja Waldman, a saxophonist, who is between New York and Montreal now.  He does some creative and innovative work.  He definitely will be a critical player in this generation, and I am very excited to be playing with him at this point in his career.

There’s also Peter Burton, who’s not just an awesome contrabass player, but also a cultural organizer. I feel very close to him politically.

There are four pieces, two duets — one with Brahja and I, and one with Peter and I — and two solo pieces, one piano and one saxophone. The two solo pieces are based on the same melody. All the melodies were worked out in practice before the recording, so we went into the recording session with some ideas, with aspects of improvisation.

LJ:  Aside from music and your activist work, you also write for several publications. Is there a unity in your work?

SC:  I do not write about art — I write about politics or current events — but it all exists in my life.  Everything I’m doing is linked to community, a loose network of people in Montreal who are working on the intersection between arts and activism. We’re very lucky to be here; there are thousands of people doing work around that here.

LJ:  Aside from political interpretations of the musical content and context, is one of the goals of this project and your previous record Duets for Abdelrazik to raise awareness?

SC: Certainly, that was the central role of the Duets album: to wholeheartedly pay homage to somebody who has experienced extreme violence at the hands of the security apparatus of Canada and the United States, and the government of Sudan, in the context of the war on terror. I wanted to celebrate this person who is not a political figure, but is a face that represents an experience that unfortunately many people have had, and most of those stories are not told.

Sometimes we understand “political music” as a protest folk song or hip hop album. With Temps Libre, I’m trying to expand on the idea that political music can also be about the emotion of being involved. ■