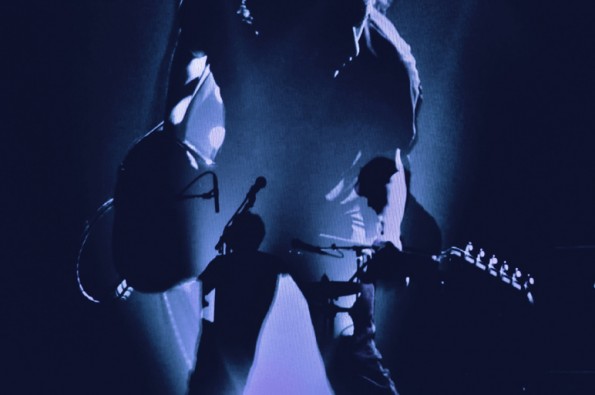 State made a name for herself as a talent agent; her roster includes Montreal’s Mad Men success story Jessica Paré. A few years back, she produced local comedy Peepers and found herself drawn to the creative side of filmmaking. Today, she balances her agency demands with her newfound artistic calling. “I still do all of that [agency business] during the day, and then I do my weird video art and film adventures at night,” she says, speaking to Cult MTL from Brooklyn, where she’s installed for a couple of months.

During the Peepers experience, State had a realization that “I decided I wanted to make stuff as well as manage people making stuff.” She started filming a documentary on Pop Montreal that was never completed, but during which she discovered Suuns. “I saw them in a loft, and there were maybe 10 people there,” she recalls. “They started playing, and I was like ‘holy shit!’ They blew my mind completely.”

After seeing the band again opening for the Besnard Lakes in early 2011, State decided to accompany them on their first-ever European tour. Shooting them on that excursion and a return voyage overseas later that year, she compiled the footage for her film.

A personal vision quite unlike your average tour doc or concert movie, the film combines raw but exciting live footage with State’s impressionistic imagery. “The band’s spirit is free, raw, forming and so is my spirit,” she says, citing French New Wave godmother Agnès Varda as her main filmmaking inspiration. “I find it nice in art sometimes when you see people trying. You see the crooked ends and the seams, you don’t see a perfect product.”

Shooting the entire film single-handedly with a small camera, she also recorded live sound at the shows. During the edit, she turned over the sound to “the wonderful Jeremy Gara” of Arcade Fire, who used it to create the film’s soundscape. “He is 100% responsible for it sounding decent,” says State effusively.

After the ambitious steps of Peepers and her own doc, State says “I’m trying to take a step backwards and do smaller things.” Using her New York sojourn to create video art pieces and live projections for bands, she continues to maintain her agency, now streamlined “to make it a bit more dealable.”

Impressed by her mid-life creative awakening, I ask if she would recommend this newfound multitasking lifestyle to others. “I think if you’re ever lucky enough to work a job that allows you to pursue art on the side, it’s a very sweet position to be in. And I’ve worked hard to get to that position. But art is really hard!” she laughs. “I’m not sure if I’m ready to give up one for the other. I like the dual lives, the business by day and the art by night. When you’re discouraged in the art, you have the structure of the business, and when you’re discouraged with the business, you have the freedom of the art!” ■