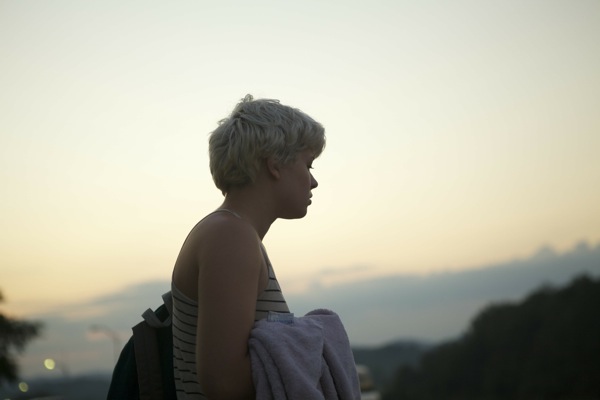 When I attended film school many years ago, there were always certain students who got the bright idea to go beyond the constraints of our assignmentst and use their access to equipment and free labour to make a feature film. Invariably, these would end in disaster, with the filmmaker bankrupted and the film itself incomplete.

So it’s all the more impressive that a trio of Concordia students were not only able to complete a feature, but to have it premiere at the Rendez-vous du cinéma québécois this weekend. Alexandra Bégin, Jesse Kray and Guillaume Collin’s Soft Gun is both ambitious and low-key, expansive and very local, in a classic indie subgenre (the road trip flick) but with its own unique twists.

Bégin plays Alex, a young Montrealer who goes out one night to a bar, where she overhears one of the language-politics conversations that often make socializing in this city tiresome. She impulsively jumps in her car and drives all the way to Decatur, Georgia, where she reconnects with her estranged cousin (Kray). She then pressures him into taking a road trip with her through the South, a voyage on which their conflicting personalities and strange relationship are put to the test.

I met Bégin and Collin, now graduated from school and making their way in the business, at a Plateau bar to talk about their film. Kray, a native of Winnipeg (as an interesting aside, he made his screen debut in a Guy Maddin film as a baby) who came to Montreal to study, is currently living with his family in Decatur. In fact, it was his regional connection that sparked the project. “We decided that we wanted to take advantage of the fact that Jesse lived in the South,” says Bégin. “We wanted to do a short together and we started writing it, and at a certain point I was like ‘guys, this isn’t a short film anymore.’”

“I don’t think we realized how intense and big it would be,” adds Collin with understatement. Launching a Kickstarter campaign — “which is way more work than anyone prepares you for,” says Bégin — the team raised $6,000 in 35 days, undertook a three-week shoot in August 2011, and finished editing a year later (smartly updating their fans and financers with a series of behind-the-scenes webisodes during the edit).

Though directing duos are becoming more common, it’s rare to see a three-person filmmaking team — let alone one that’s functional. This trio seems to have figured out a workable system; with Bégin and Kray appearing onscreen, they developed the characters while Collin took care of the technical side with cinematographer Isabelle Stachtchenko Sirois.

“I at no point had said ‘I wanna be an actress’ in my life,” says Bégin of her decision to star in the film. “It was partially for the learning experience. I do direct actors, and I feel sometimes it’s unfair that I don’t put myself in that scenario. I wanted to know what it felt like to talk with actors better. And with the constraints and budget we had, it’s not like we could call some actress and be like ‘Why don’t you come on this crazy road trip with us?’”

Playing characters that Bégin describes as “very much based on our personalities, just accentuated a little bit,” the two leads develop a compelling rapport, with uncomfortable undertones that the film admirably keeps at a low boil. Citing Terence Malick’s Badlands and Kelly Reichardt’s Wendy and Lucy among their influences, the directors create a subtle and understated drama that stays well away from the clichéd violence and melodrama of many a supposedly more mature filmmaker.

In the course of explaining the various metaphors behind the title, Collin notes that the film is “not really dark, harsh, graphic. It’s really soft.” But not in a bad way. Abetted by Sirois’ great cinematography, it makes for a memorable journey and a promising start for this talented filmmaking team.

Though it takes place almost entirely in the American South, the film has a distinctly local feeling, with certain conversations that will make every Montrealer feel a pang of bittersweet familiarity. The daughter of a divorced francophone father and anglo mom, Bégin is acutely familiar with the city’s internal divisions. But despite her semi-autobiographical character’s desire to flee, she says, “I feel morally obligated to stay here. A lot of people I know have shipped off to Toronto ’cause it’s easier. I’m like, yeah, it’s easier, but if artists don’t stay here to contribute to the culture, obviously it’s gonna be one-sided.” ■