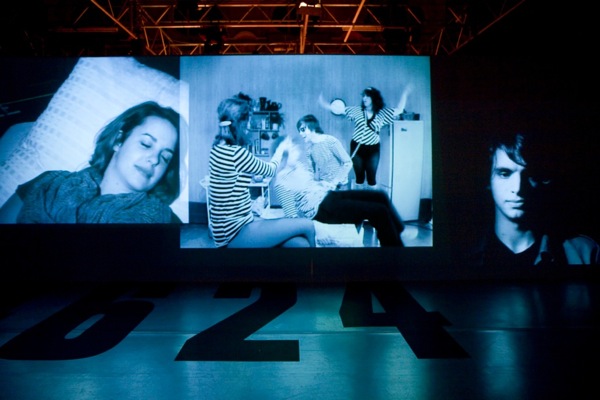 Finally! A show that lets me review both what’s on stage and the rest of the audience.

Gob Squad is an established UK/German collective active since 1994, who were in town for a three-night run at the awesome Usine C venue. The play is performed from a hidden backstage, which the audience obediently traipsed through en route to their seats before the show, while the crowd watches the show projected onto a large triptych screen for a “live TV” effect. They regularly make use of volunteers, dragging the willing onstage and directing them live through microphone-headsets.

The Squad’s current project is a parody of Andy Warhol’s Kitchen, one of the auteur’s many films chronicling the menagerie of freaks and weirdos he maintained in his Factory. The movie was meant to be a vehicle for Edie Sedgwick, who was by then so thoroughly drug-addled that she couldn’t learn her lines and spent much of her screen time literally listing various objects in the room. She was, in fact, so drug-addled, that you can’t help but feel a little bit proud any time she correctly identifies one.

Gob Squad’s Sharon Smith spoofs Sedgwick, hilariously, absolutely nailing the star’s vacant, hammy performativity. Over the course of the show, each of the troupe’s four central actors brought out a ringer from the audience to play themselves. It’s a risky move, handing over almost half of the show to untested performers, but Gob Squad are total vets, and manage to milk even the least compelling volunteer for all they’re worth. The night I attended, they recruited one poker-faced attendee who performed so well she almost risked upstaging the pros, but the nature and quality of the show of course depends on what/who they have to work with on any given night.

As a premise, it’s cool. I was truly impressed by the quality of the performances, both by the “real” cast and perhaps even more by how much hilarity they were able to channel through audience members. It takes real skill to direct a volunteer, particularly when deadpan comedy is on the menu.

Here’s the thing: Warhol’s a great artist, etc, etc – but all these etcs aside, Kitchen’s quite simply a hella boring movie to watch. Its main entertainment lies in whatever thrills you might get from watching Sedgwick’s Lohanesque slow-motion car-wreck. And Gob Squad’s Kitchen is somewhat saddled with the inherent boringness of four people getting fucked up in a kitchen (FYI it’s only fun when YOU’RE the one getting fucked up in a kitchen).

When they got them, the laughs were large, but at times these were too far and few between, and those unfamiliar with Warhol’s original might have found it absolutely nonsensical. I could happily have spent a half hour less in that chair.

That said, the remainder of the audience leapt up in a standing ovation at the show’s end, so maybe I judged this play (and audience) too quickly. ■